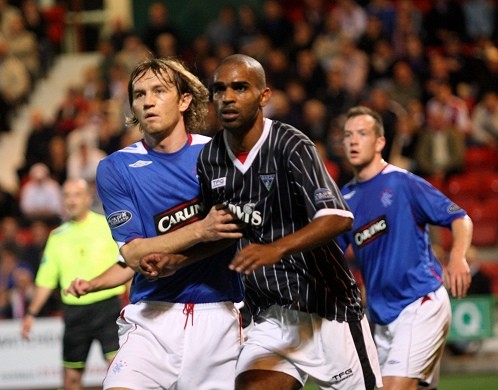 Everyone was taken aback when Rangers Manager Paul Le Guen announced eight changes from the team beaten 2-1 at Easter Road the previous Sunday. The changes must have boosted the home sides pre match hopes as they prepared to take on a Rangers sideï¿½ that includedï¿½ seven Scots who perhaps had an eye on the Old Firm game on Saturday.

In contrast Dunfermline made one enforced change Stevie Crawford, ineligible through being cup tied at Aberdeen, dropped out and Freddie Daquin came in.

Dorus de Vries was the first keeper to touch the ball coming out quickly to gather a speculative Rangers ball into the Dunfermline penalty box. When Scott Wilson was penalised for his challenge on Nacho Novo, Chris Burke was able to send in the free kick from the left touchline but the Dunfermline defence headed away.

A tenth minute free kick from just inside the Rangers half was lofted into the Gers box but too high for the inrushing Stephen Simmons. Daquin then had a burst up the right but his cross ball travelled straight through the opposition six yard box. Another free kick came Dunfermline`s way in 13th minute when Simmons was flattened by Papac but Hamilton`s drilled shot from 35 yards was blocked out.

Novo was fouled by Wilson and Charlie Adam 25 yards out whipped in a ball that the cool Bamba did really well to clear out of Papac`s path. Following good play from Adam, Chris Burke was able to centre a ball that Kris Boyd headed downwards but his effort from just six yards bounced up and over the crossbar off the woodwork.

Hamilton forced a corner in 22nd minute and it was the former Motherwell man who arrived from deep, squeezing between Alan Hutton and Gavin Rae to head strongly but wide to the left of target. Rae`s tackle on Daquin summoned McGuire and Bamba up but they got no joy from the free kick. A similar outcome came when Simmons pumped another free kick into the box on the half hour.

Rangers had a good chance after Simmons was dispossessed just outside the centre circle, Novo sped away with the ball but his poke through to Boyd could not be controlled and de Vries was there to collect.

Both sides found the slippery underfoot conditions difficult and there were few flowing moves or passing movements. Dunfermline were giving as good as the got but the match was lacking goalmouth incident and both sets of fans were hoping that the cup tie might ignite in the second half.

Simmons and Mason got the second half underway with the Pars attacking the Norrie McCathie stand end. After 80 seconds Dunfermline won a corner on the left side but Boyd headed clear and with men up in the Rangers half Bamba did well to stop Sionko`s cross from a Novo break.

Boyd sent another header over the crossbar in 52 minutes then Burke flashed a cross wide of the left goalpost as Novo chased in. Three minutes later another spectacular Bamba clearance killed off the threat from a sweeping cross in from Sionko.

At the other end a fine diagonal ball into the Rangers box was headed back across goal for Stephen Simmons but the header was just too high. Rangers; Kris Boyd then caused several problems for the Pars firstly playing the ball on to the arm of Phil McGuire causing loud appeals for a penalty from behind the goal, and then heading a Chris Burke header wide to the left of goal.

Rangers kept up the pressure with Steven Smith sending over a ball that Hamilton knocked down into the path of Alan Hutton and his shot from 16 yards deflected off Souleymane BAMBA to sneak in at the right post. De Vries had no hope of stopping the 65th minute goal.

Boyd came close seven minutes later but McGuire did enough to put off the former Killie man and his header went over the top. When Allan McGregor`s long clearance landed between Bamba and BOYD, the Rangers striker brushed aside the defender to lash in an unstoppable strike from 25 yards.


De Vries kept out Hutton with a fine right fisted save that prevented the ball soaring into the top right corner but by this time the heads were down and despite the introduction of Owen Morrison and Scott Muirhead there was no dramatic come back from the Pars. In fact only a headed clearance off the line by Phil McGuire denied Adam a third Rangers goal in 82 minutes.

No trip to Hampden then this season in this Cup competition as Rangers won their 13th of 15 League Cup meetings.