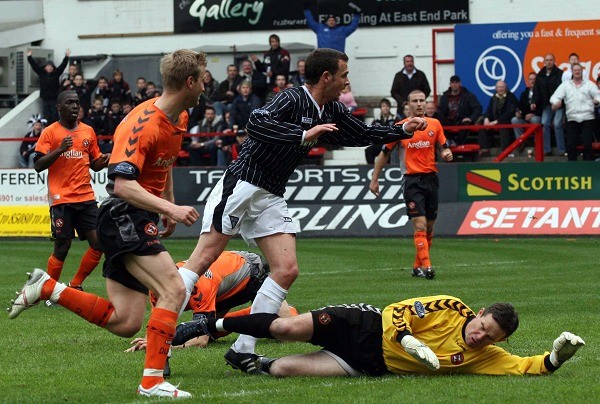 The next three matches would determine where Dunfermline were playing next season, would it be the SPL, SFL or even UEFA Cup? Dundee United were the first obstacle and with the Pars having lost only one of their last five matches they were in confident mood.

Tam McManus and Stephen Glass returned to the side replacing the suspended Phil McGuire and Adam Hammill in an attacking line out designed to play 4-3-3. Despite being one yellow card away from a four match ban, Barry Robson replaced Mark Kerr, United`s only change from the side successful two weeks ago at Pittodrie.

In the first half the Pars were attacking the goal at the McCathie Stand end and within 45 seconds the home fans hopes were high. A long throw from the right launched into the penalty box by Jamie McCunnie was headed on target off the head of Sol Bamba, Stillie stopped it but Jim McIntyre turned the rebound past the post albeit from an offside position.

There was nothing to pose Stillie much more anxiety until Jim O`Brien`s cross allowed McManus a header on target in 13th minute but the ex Pars keeper held easily.

Noel Hunt conceded a free kick in a dangerous position deep on the left. Glass and O`Brien stood over the free kick but it was the right foot of O`Brien that directed the ball to the far post but Lee Wilkie`s leap intercepted the ball before it reached the inrushing Bamba. Greg Shields gathered the clearance to return the ball to the far post but McManus headed the good opportunity wide of the left post.

On 22 minutes Glass sent McManus in on the left side of the Dundee United penalty box but Jim McIntyre pulled off the miss of the season to send the ball wide left from six yards with the whole goal in front of him. United were linking well and demonstrating some neat touches without threatening de Vries goal. Jon Daly had a shot from the edge of the box but Bamba`s challenge was enough to make him fire wide.

On the half hour a free kick 23 yards out presented the Tangerines with a good chances especially since they had Barry Robson to take it. The attempt looked destined for the bottom left corner of the net as it avoided the wall but fortunately the low struck shot skimmed wide of the post.

There was a real fright as Christian Kalvenes dispossessed O`Brien as he attacked in the United half. The Norwegian came forward on the break exchanging a pass with Jon Daly before shooting for goal from 15 yards. de Vries saved and Greg Shields broke fast, the Pars skipper was deep right to exploit the absence of Kalvenes. Six minutes later McManus tested Stillie with another header, the keeper saved it but the offside flag was up. Next United forced two corners five minutes from the break with Noel Hunt winding up his old house mate Scott Muirhead as he dodged around de Vries. Referee Freeland watched and after Dorus de Vries had fisted away the first penalised the Irishman at the second.

The Pars had a free kick in a good position 22 yards out on the right but the United wall came out on top although Gomis collected a yellow card for breaking too early at the first. United didn`t look like they were going to be happy to concede the points to the Fifers and they started the second 45 with great purpose. Lee Wilkie pushed up to cause some concern but it was Muirhead tug on Collin Samuel`s jersey that presented the best early chance. The 51st minute free kick on the right level with the penalty spot, was floated over the penalty area, fortunately too far.

Bamba stopped a shot from Robson and then a Daly header was booted clear by Scott Wilson. de Vries held a Kalvenes before the Pars sprung the visitors offside trap with Stephen Glass getting through on Stillie. The on loan Hibee did the hard part to knock the ball up and over the keeper but he then when clear, hurried his 58th minute shot and blootered it into the visiting support from 15 yards. Another sitter that the Pars failed to accept. Seven minutes later Glass won a free kick just 26 yards out in a central position. He took it himself but again sent the ball into the stand. There was a real let off at the other end as Daly met a cross from the right and headed over the bar at the back post.

As Adam Hammill came on for Tam McManus who was limping after crunching tackle from Kalvenes, a United free kick was lofted into the Pars box and they appealed for a penalty as Wilkie was tumbled in a challenge with Bamba. O`Brien`s late touch on Easton handed United another chance with a set piece wide left. Robson crossed and David McCracken headed the ball over the top.

In 75 minutes another Robson free kick picked out Easton on the edge of the box with a low pass and he tested de Vries with a good shot on target. Hammill was then put through and he advanced into the right side of his opponent`s half penalty box. He chose to check and cut back for McIntyre but the defence was back to block the former United man`s shot. Nerves began toï¿½ nip as United brought on Robertson and relented not. McCunnie cut out a pass to square to Glass who prodded through for O`Brien but he was offside as he forced a save out of Stillie. With five minutes remaining Mark Burchill came on and the Pars were content to retain as much possession as they could.

The minutes that felt like hoursï¿½ duly past and at the final whistle, there were great scenes of celebration both on and off the park as Pars players and fans realised what had looked like the most impossible mission had become very possible. What a timely result. Three points that take Dunfermline to within a point of St Mirren who do not play Falkirk until Monday night. McManus`s goal was the difference although hadï¿½ Athletic taken all their chances some Pars fans might have had longer fingernails at the end!