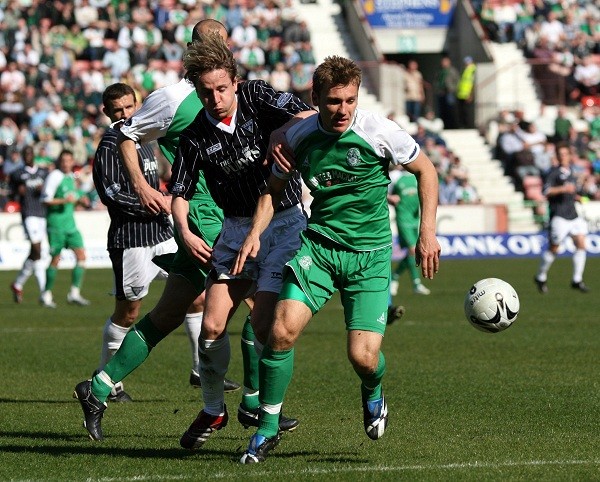 Adam Hammill dropped to the bench to make way for Jamie McCunnie, and Tam McManus returned after serving his suspension in place of the ineligible Stephen Glass. Given the Pars precarious league position, The Final Countdown - the usual East End Park pre match music seemed to have added importance for this the sixth last fixture of this SPL season. Hibs kicked off attacking the goal in front of their travelling support in the sun kissed East Stand and Benjelloun in his appropriate - no doubt by accident given his faith - bright yellow Easter boots, hit the first effort of the match into the left sidenetting within two minutes.

Two minutes later Benji directed a Steven Fletcher delivery from the right wide at the other side of the goal while the home fans had little to cheer until Greg Shields high ball in from the right was headed on target by Scott Muirhead only to be cleared by the Edinburgh defence.

McCunnie`s ball into the path of Jim McIntyre then raised the decibels but Steven Whittaker stepped in to win a well timed tackle on the edge of his box. It continued end to end with Bamba neatly stopping the threat of Fletcher after a Benjelloun release and at the other end Phil McGuire heading wide after an O`Brien free kick was only half cleared.

There was still only 12 minutes gone when Benjelloun`s cut back on the left side of the box was poked on by Beuzelin and fortunately Fletcher could not convert from the six yard line. Another good chance came at the other end when Muirhead played in McIntyre. McNeil was out fast to block and Tam McManus drove the resultant chance wide into the sidenetting on the left side. Pressure relented on the defences but only for five minutes. Benjelloun was lined up for a shot from 16 yards but Muirhead blocked and Scott Brown`s follow up was deflected wide for a corner on the right. de Vries tipped David Murphy`s inswinger behind his right hand post and from the one from the left Hogg could only force another corner. Murphy hit a free kick over the crossbar from 30 yards while at the other end a McIntyre ball in from the left corner flag was headed over the Hibs crossbar.

In 32 minutes Jim McIntyre was sent tumbling by Hogg as he went for an O`Brien ball in from the right but Referee Craig Mackay was non plussed by the loud appeals from the McCathie Stand. Next Muirhead broke away down the left but his cross through the penalty box had no takers and then Andrew McNeill held a long shot from O`Brien.

Chris Hogg`s challenge on McIntyre won the Fifers a free kick 28 yards out to the left side. Muirhead ran over the ball and McManus forced McNeil to touch the fiercely driven shot over his crossbar.

Scott Morrison did well to pinch a scoring opportunity off the boot of Fletcher while at the other end Gary Mason forced McNeil to hold his diving header.

It had been quite a first half with the two teams serving up more of what might have been kept for next weekend`s Cup tie. No goals though at the break and there would be little doubt what kind of urgent instruction would be dished out by Stephen Kenny at the break. After 225 minutes of SPL football against Hibs this season a Pars goal has yet to be produced.

John Collins brought on Ivan Sproule in place of Ross Chisholm for the second half. Hibs cleared an O`Brien cross before it reached McIntyre while at the other end Bamba stepped in to neatly intercept a Beuzellin pass towards Fletcher on the to of the D at the home end.

There were loud cheers from the home support when Adam Hammill was introduced as Stephen Kenny`s first substitution in 56 minutes. A free kick against Mason when he nicked the ball off Sproule was headed clear by Shields and on Hammill on the break switched the ball to O`Brien on the opposite wing. A Pars corner was won and the all red clad Hibs keeper had to be at his best when O`Brien`s cross was headed down by Bamba and Jim McIntyre sent the ball on target with an overhead kick from the left side of the six yard box.

Hammill threatened again with another breakaway in 65 minutes receiving Bamba`s pass and interchanging with McManus before being stopped by Brown who conceded a free kick 24 yards out. McManus took the responsibility but hit his effort over the bar and into the Hibs support.

Dunfermline chances kept coming with O`Brien almost getting in for the shot and Mason making McNeil save. McManus shot wide right from the edge of the box. A 70th minute Whittaker corner was defended and sent Hammill away again but his final pass to McManus was intercepted.

Time was running out for the Pars when Mark Burchill came on with the twelve minutes remaining but it was Hibs who came closest to breaking the deadlock. Zemmama`s run threaded a through ball to Murphy and fortune favoured the Pars as the ball slipped into the sidenetting off McGuire and over de Vries. When Steven Whittaker picked up a yellow card for his tackle on Hammill seven minutes from time, the Liverpudlian got up and whipped over the free kick from the left touchline. Phil McGUIRE arrived like an express train to head into the right side of the net from 14 yards. The joyous relief was apparent not just on the terraces but in front of the dugout where the ex Don decided to head to celebrate his first SPL goal for Dunfermline. Hibs pushed up and there was some frantic defending in the Pars penalty box that eventually resulted in the ball being booted towards Burchill in the centre circle. There the no.9 beat off the tackle of Whittaker and was left to run at goal from the half way line. Andrew McNeil came out and deflected Burchy`s shot wide for a 85th minute corner on the left. Whittaker did well to block Bamba`s shot from the corner and really after that the goalkeepers were never troubled for the last five and the added five minutes of the game. There can be no better a time for Dunfermline to record their first home win in the SPL over Hibs since December 2001. St Mirren were without at match since they play Rangers on Sunday so the Paisley team lead Dunfermline by four points and the meeting of the two relegation candidates on Monday 30th April now looks like a really big match.