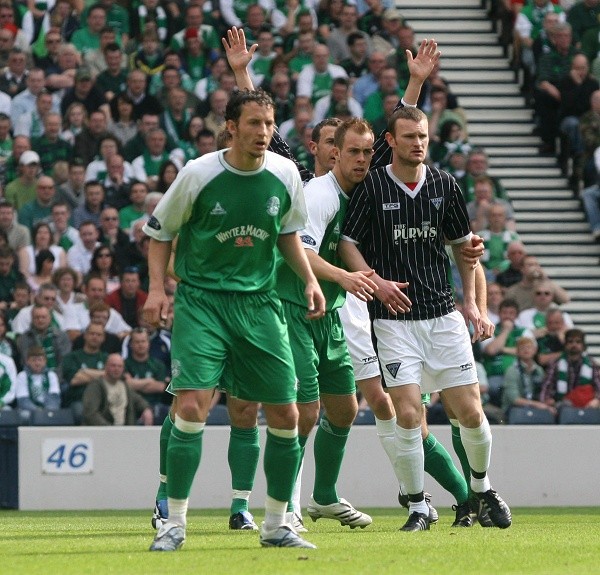 Only his past record in cup competitions gave an early clues that Stephen Kenny could take Dunfermline to Hampden for the Tennent`s Scottish Cup Semi Final but after fine wins over Rangers, Hearts and Partick Thistle only Hibs stand between the Manager and his second cup final in just six months.

For a team propping up the SPL and the prize for the winner almost certain qualification for next season`s UEFA Cup, this was a most improbable fixture. However, given Hibs self created turmoil since their defeat at East End Park the previous Saturday in the SPL, there was a real chance to progress to the Final against Celtic in May and grasp that prize.

Scott Wilson returned in place of Scott Morrison and Adam Hammill took the place of the cup tied Tam McManus. Hibs made one change from the previous Saturday`s selection, preferring Ivan Sproule to Ross Chisholm. The big red T that covered the centre circle was folded up, the Pars team went up the line of Hibs players shaking hands and it was McIntyre and Mason who kicked off for Dunfermline playing west to east. Sol Bamba was called upon to make the first crucial tackle to stop Abdessalam Benjelloun as he burst into the Pars box.

A Hibs corner on the three minute mark was a great opportunity for Hibs as the inswinger from the right found the head of Chriss Hogg at the far post but the former York City and Ipswich Town player headed wide left. Two minutes later Steven Whittaker`s run ended up with a fine pass across the face of goal and fortunately it was Steven Fletcher and not the ball that ended up in the net. Apart from one Hammill free kick into the Hibs box it was all Hibs but Jones turned Beuzelin`s pass into Dorus de Vries` hands. Andrew McNeill at the other end had barely sniffed the ball when in ten minutes Jim McIntyre`sÂ back header on a long throwÂ from Muirhead on the left found birthday boy Jamie McCunnie but he hit the left upright and from seven yards Jim O`Brien shot the rebound on target only for McNeil to enter the game with a great diving save.

On the quarter hour Bamba was forward for a Muirhead throw in and the Pars forced a corner on the left that O`Brien sent over but despite the aerial attack from Shields and McGuire the Hibs defence came out on top. After Hibs early pressure Dunfermline began to look more settled with Hammill in particular threatening the Edinburgh side. It was the on loan Liverpool player who created the bedlam on the edge of the Hibs penalty area with Mason and O`Brien involved before McIntyre set up Phil McGuire to release a shot from 25 yards that looked destined for the top left corner until McNeil flung himself across his goal to tip the ball over his crossbar. Jim O`Brien connected when Muirhead swung the corner in from the right but his shot deflected off Jones for another corner on the left.

The 25th minute run by Ivan Sproule caused problems at the other end but Wilson`s challenge stemmed the pace of the Irishman and then Bamba intercepted the cross to head clear. Four minutes later de Vries heldÂ impressively when Murphy cross was headed down towards the bottom left off Wilson after Bamba and Fletcher had attacked the cross. Dunfermline had another good opportunity in 33 minutes when Hammill ball over from the left was headed wide right by Jim McIntyre. Jones had a looping header from a Murphy free kick that de Vries held well under his crossbar and next Fletcher shot high over that bar from 25 yards.

A strong challenge by Greg Shields won the ball off Fletcher just inside the Hibs half and the pass to O`Brien fed Hammill to cross into theÂ near postÂ where McNeil came out on top as McIntyre went for the ball. In the final minute of the half Fletcher hit a well struck shot inches over the crossbar and so it remained 0-0 at the break.

It had been an entertaining first 45 with chances at both ends and if only Jamie McCunnie had hit the inside of the post the Pars might have been ahead at the break. Both teams were forced to use substitutes at the restart. Greg Ross replaced Phil McGuire and out of favour goalkeeper Simon Brown was brought on in place of the concussed Andrew McNeil.

Hibs started at a frantic pace with Bamba immediately having to make a great intervention to steal the ball away from Rob Jones in front of goal. Then in 49 minutes a strong run by Scott Brown took him round Mason and into the Pars box to cut back from the byeline under Bamba for Steven Fletcher. Six yards out it looked like a simple task for the Hibs no. 20 to turn the ball into the net butÂ Greg ShieldsÂ made a marvellous challenge to keep the score 0-0.

Hammill fired a 24 yard free kick over Simon Brown`s crossbar and then it was more Hibs pressure with Sproule sending a real screamer narrowly over the bar.

A Greg Ross ball that picked out Gary Mason on the right side of the penalty box but Hibs conceded the corner that unfortunately came to nothing. Dunfermline kept the pressure on with a scintillating run from Hammill feeding Mason but his shot from a promising position just inside the opposition penalty box was despatched high and wide over the target. Hibs wasted two corners but worryingly balls were coming into the Pars box from both sides that happily were well dealt with by the Fifers defence. With 20 minutes remaining a weak clearance from de Vries set up Brown for a shot from distance at an empty goal but his effort was too high.

It was beginning to be all Hibs and when Murphy found Lewis Stevenson on the left, Sol Bamba headed away the dangerous cross. Defenders found themselves chasing Sproule and Brown yet there was respite with Ross sending Hammill up the left. When Scott Wilson dumped Fletcher off the park on the left side of defence referee Craig Thomson showed the ex Rangers man a 77th minute yellow card that would mean the Pars man would have to miss the next cup tie, replay or final.

Seven minutes from time Bamba made a world class clearance off his line to keep out a Benjelloun strike after de Vries had punched away a Murphy cross into his path. The ball had looked net bound and the huge frame of the Ivory Coast internationalist was required to miraculously leap up and head the ball away.

The Pars support were roused as a corner was won on the right and then a Scott Muirhead throw was launched into the Hibs box. Whittaker avoided a second yellow card when stopping Owen Morrison`s progress up the left. The electronic board showed three added minutes as Morrison won a corner on the left and there were gasps from the Dunfermline support as Simon Brown spilled forwardÂ when he went for the ball.

Mark Burchill came on in 93rd minute and Hibs were forced to concede a corner but the deadlock was not to be broken and a replay will be needed on Tuesday 24th April kick off 7.45pm.Â The second half was lots of Hibs possession and territorial advantage but the Fifers battled away to create their chances too.Â Great performances throughout with possibly Bamba and Muirhead topping the ratings.