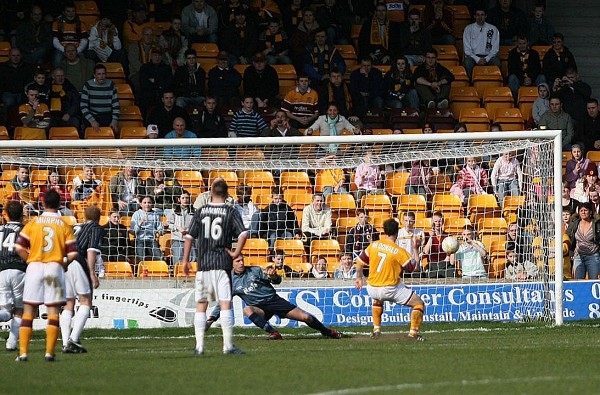 The Pars were without the services of suspended trio Tam McManus, Scott Wilson and Jim Hamilton. Greg Ross dropped to the bench, Hamilton and Jamie Harris have both undergone surgery on their knees in the two week lay off since the last round of SPL fixtures but on the positive side Mark Burchill was on the bench and Greg Shields returned for his first game since picking up a hamstring injury at Tannadice at the end of January. Souleymane Bamba replaced Scott Wilson and Scott Muirhead was drafted in to allow Jim O`Brien to team up with Jim McIntyre upfront.

Striker Ross McCormack was out however with a knee ligament injury, and defender Paul Quinn served the second match of his two-game suspension. Phil O`Donnell (achilles), Brian McLean and Keith Lasley (both knee) remained on the sidelines.

With the large travelling support accommodated in the Main Stand Motherwell kick off towards the empty away stand and after just one minute both Scott Muirhead and Dorus de Vries lay on the deck injured in to separate incidents.ï¿½ Fortunately both were able to continue.

Motherwell caused the visitors early problems with Bamba conceding a corner to prevent Keegan and then de Vries turning a good low drive from Kevin McBride round his right hand post.

Jim McIntyre launched the first Dunfermline shot at goal in 11th minute but from 25 yards out and wide left of the penalty box he fired wide right. Next minute Krisztian Vadocz chopped down O`Brien and awarded the Pars a chance from a 30 yard free kick. Adam Hammill stepped forward and hit his effort into the Davie Cooper Stand off the top of the net.

Play continued to be end to end with McBride sending a screamer of a shot narrowly over the top from a Mark Reynolds corner in from the right. At the other end Dunfermline switched the ball about in the `Well penalty box with Gary Mason, Scott Muirhead and Stephen Glass trying to set up a shooting opportunity.ï¿½ Eventually McIntyre took the responsibility but directed the ball straight at Graeme Smith.

No doubt fuelled by the very welcome news of a Falkirk goal (you don`t see that often on this website) against St Mirren, the Pars fans roared on their team every time they came forward. O`Brien threatened but just could not deliver a cross that would be converted. Mason and McIntyre tried to get on the end of his deliveries to no avail.

O`Brien himself met an Adam Hammill cross from the right on the half hour but could not get enough on his header and Muirhead`s return failed to come up with the goods either. Next Bamba raced in late to attack a long throw in from Muirhead but somehow Motherwell defence came out on top.

Mason stopped Murphy`s breakaway after Hammill had been dispossessed in the opposition half and it was soon back in front of the loud Pars support. Craigan received a stern lecture for his challenge on O`Brien but Hammill sent the free kick through the penalty box without being touched.

With 44 minutes on the clock Corrigan`s foul on Muirhead afforded Hammill another chance to swing over the ball from close to the left corner flag but Muirhead`s header at the back post went weakly into Smith`s arms.

McIntyre and O`Brien got the second half underway and the Pars soon had Motherwell under pressure with Kerr fouling O`Brien and handing Glass an opportunity from a 20 yard free kick. Smith came out on top gathering the ball to his left.

Things went badly wrong however when Motherwell were given a rather soft penalty in the fifth minute of the half. Scott McDonald went over Phil McGuire`s outstretched leg. The referee pointed to the spot and branded a yellow card at the luckless central defender.ï¿½ McDONALD then made no mistake from the spot placing the ball to the right side of the net.

Three more yellow cards followed in the next eight minutes and McDonald`s two whacks at McGuire went unpunished. McGuire had a good attempt at an O`Brien free kick, Keegan forced a fine save out of de Vries and then McIntyre tested Smith from a Glass free kick.

Stephen Kenny introduced Mark Burchill in place of Scott Muirhead but Motherwell went two ahead in 62 minutes as McDONALD evaded the offside trap to run on to a flicked on ball from Keegan.ï¿½ The Celtic bound striker netted from the edge of the box with McGuire and Morrison on the chase.

The travelling support were silenced and the mood grew more sombre as the likelihood of gaining any ground on St Mirren began to look extremely doubtful.ï¿½ McGuire was withdrawn and Stevie Crawford thrown on. Kerr`s weak pass back let Craw in on the keeper but having taken the ball left cut the ball back into Smith.

Ten minutes left and Hammill`s pass to O`Brien on the right.ï¿½ He launched a cross deep into the `Well box but McIntyre`s header back fell outside the target. Then Craigan headed away another O`Brien ball driven in from the right after he had rounded Murphy.

Vadocz`s chest down to Keegan should have been sent home from ten yards but the Irishman sent the ball over the bar.ï¿½ In the end it didn`t matter.ï¿½ The game was beyond the Fifers and despite all their efforts there was no way they could get the better of the Motherwell defence. Disappointingly Adam Hammill picked up an injury and needed to be subbed by Bobby Ryan as the game entered stoppage time.

Another match without a Dunfermline goal and without any points.ï¿½ St Mirren remain still six points ahead with a game in hand against Hibs.