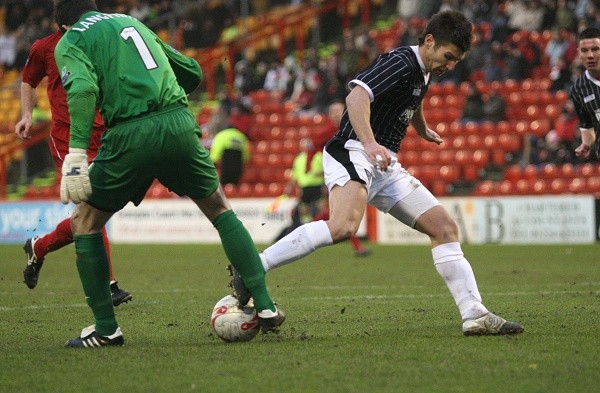 Aberdeen kicked off with the wind at their back defending the goal at the Richard Donald Stand and the ball was in Dorus e Vries`s hands very quickly.Â Stephen Lovell was first to threaten on two minutes but the tracking back of Phil McGuire was enough to make him blast wide of the keeper`s right hand post.

It was Lovell who almost breached the Pars defence in 10th minute but a telling tackle from McGuire stopped the Aberdeen attack 25 yards out. Dunfermline`s first real goalmouth action came one minute later when Stephen Simmons broke into the right side of the Dons half but Jamie Langfield dropped down to save.

There was a real let off for the visitors when Mackie sent the ball wide left for Chris Clark to swing over a great ball that Lovell headed on over de Vries and fortunately Scott Wilson was on hand to clear.Â The clearance however was heading straight back to Lovell just six yards out but luckilly de Vries was able to put hands on the ball.

In 27th minute Simmons slipped the ball to Hammill who in turn picked out Mark Burchill on the top of the D and the Pars man hit a shot on the turn that bounced up into Langfield`s hands.

Six minutes later however disaster struck when Darren Mackie broke down the right.Â HisÂ lay off to Clark was drivenÂ into the six yard box but broke off Lovell in amongst the Pars defenders and when MACKIE gathered the ball on the byeline just outside the six yard box, he found the inside of the sidenetting on the far side of de Vries`s goal to put the Dons into a 33rd minute lead.

Five minutes from half time Dunfermline forced another corner on the right.Â Greg Ross and then Adam Hammill teased the left side defenders but when Hammill`s shuffle produced an inviting ball at the near post, Stevie Crawford was denied the chance as the Dons conceded the corner.Â From the corner struck low from the boot of Glass, Scott Wilson fired in a shot that was deflected into the stand but no corner.

Chris Clark broke through for another chance but not for the first time the ball went well wide of target. Not the most encouraging of first halves, one efffort on target yet Mackie and Lovell have been given plenty of chances.Â Dunfermline have to be happy to be just 1-0 down after 45 minutes.

Just three minutes into the second half Smith and Clark worked the ball on the left to open up a chance for Scott Severin.Â He struck the ball from 25 yards and de Vries fisted down the fierce swerving shot and Lovell got a chance but he was offside as he hit it well away from goal despite being right in front of it.

Next minute a passback gave Burchill an opening but Langfield did enough to close out the Pars.Â In 54th minute Burchill beat off the challenge of Foster but the Pars tried to walk the ball into the net but failed as the final pass found no one on the right side of the box.

Ross did well to clear the danger as Mackie broke through but then Smith got around him and a diving header from McGuire kept the Dons out.Â Bad luck handed Aberdeen a 58th minute penalty when the ball came off Gary Mason and on to the arm of Stephen Simmons. Referee Brian Winter pointed to the spot.Â Barry Nicholson stepped up to take the spot kick and de Vries came out to discuss the likely direction that Baz would opt for.Â de Vries kicked the ball off the spot as he made his way back earning himself a yellow card in the process.Â NICHOLSON placed the penalty to the keeper`s left for his seventh goal of the season.

McGuire was given a great opportunity to get something back in 63 minutes when a Hammill free kick midway into the Dons half but his header from eight yards went wide left.Â The Pars best move of the game then came six minutes later. Hammill played the ball wide right to O`Brien and his ball into the Dons box was nicely met by Hamilton but Langfield turned it round his post for a corner on the left. That corner found O`Brien but he shot wide left.

Bobby Ryan came on for Simmons and Iain Williamson for Burchill with quarter of an hour remaining. Williamson fought hard in 80th minute to lay the ball of for Hamilton but his pass to Glass out left did not get the return required. A free kick gave Hammill another crack at goal but the ball went wide to the right.

A breakaway in the 83rd minute gave Aberdeen another goal.Â Michael Hart was quick down the rightÂ and his ball into the Pars six yard box was neatly turned past de Vries by Stephen LOVELL to make it 3-0.

The ninth SPL match without a Pars goal in aÂ miserable afternoon for the Fifers played in horrid conditions. Â The only cheer was provided Â by Dundee United`s win at Love Street.Â Still eight points behind St Mirren with 11 matches left.