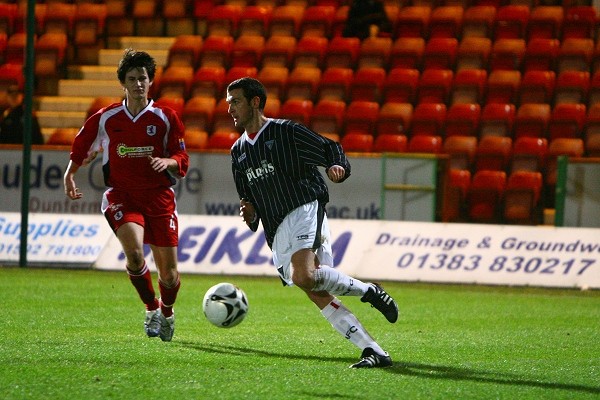 It was a fine blend of youth and experience that DunfermlineÂ fielded for
the Fife Cup tie against Raith Rovers on Tuesday night.Â Jim McIntyre made
his long awaited return to competitive action and was out to impress from the
start. His linking play and numerous cushioned headers would not have been
missed by Manager Stephen Kenny who watched from the Directors Box.

The visitors, with none of their starting eleven from Saturday`s win at
Forthbank, had the first clear cut chance when Martyn Pirrett raced through the
centre from midway to release a shot from the edge of the box that slipped
narrowly wide left in fourthÂ minute.

The ParsÂ nearly opened the scoring in 11th minute from a corner on the
left but Joe Dingwall` preventive action on the line kept it level.Â Five
minutes later Freddie Daquin headed through a ball that was passed back to
keeper Currie ever so tightly and Iain Williamson almost nipped inÂ before
the grey shirted stopper.

Stephen Manson ran through the Pars penalty area from the right and had he
slipped the ball to Pirrett the Raith no.11 might just have had the easier
chance.Â In the end Manson crossed from the left byeline and de Vries
failed to hold letting Jason DARLING scoop the ball on target and despite Nick
Phinn`s efforts at the near post the ball crossed the line to put the Kirkcaldy
side ahead. The home side made every effort to redeem themselves.Â Neil Fenwick was
still forward from a corner when Phinn turned the ball out wide right for a
centre that was hit firmly but wide of target.Â Morrison tested the keeper
with a looping shot that was turned over the bar at the last minute. From the
resulting corner McIntyre saw his header cleared off the line again by Dingwall.

In 36 minutes a McIntyre lay off into space brought Morrison into play and he
tested Currie, closely followed by a Williamson effort that was blocked by
Fotheringham.Â At the other end Manson blasted over the bar and it was the
Pars who were to score the second goal of the night.

Iain WILLIAMSON caught out the Raith defence that were watching McIntyre get
back onside and the 19 year old ran in to blast a well executed shot past the
Rovers keeper.Â Two minutes later McIntyre saw the chance with MorrisonÂ advancing
into the boxÂ and the experienced striker swept a left footed pass wide left
Â to set up the Irishman with a glorious opportunity that he unluckily sent
high over the top.

the second 45 got off to the best possible start with Williamson chasing a
Woods ball down the right wing and delivering a great ball for McINTYRE to turn
the ball in at the far post. The lead didn`t last ten minutes however.Â A
fine ball deep right from ex Livi player Brian Fairbairn was nicely placed for
PIRRETT to head in at the far post.

Four minutes later in 58 Phinn sent the ball wide left from where McIntyre
crossed first time.Â Williamson got an elbow in the face as he rose to meet
it and when Daquin accepted the chance he hit it into the McCathie Stand.Â
One had more than one attempt to get the Rovers back in the lead but most times
the ball ended up in the stand.

Calum Smith came on for Jim McIntyre in 74th minute but the 34 year old
looked very comfortable with his return. Neither side made any impact on the
scoreline and at 8.50pm the match went straight to penalties.

2nd - Owen Morrison blasted the ball over the bar 1-0