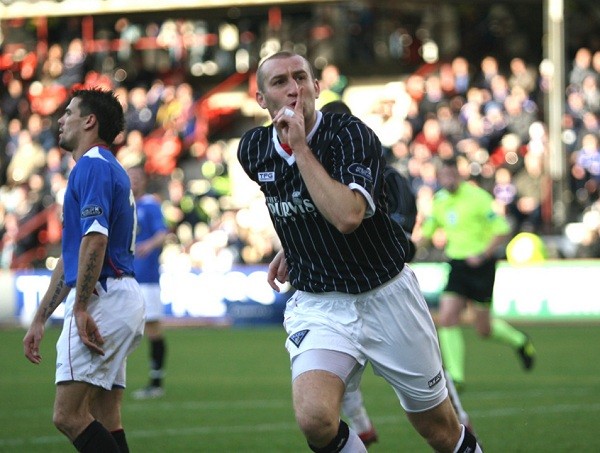 The Scottish Cup brought the Pars some relief from the pressures of the SPL relegation battle but they were without their stand in skipper Greg Shields (ill) and Gary Mason (back injury).Â New on loan signing Jim O`Brien went straight into the starting line up.

Rangers welcolmed back Barry Ferguson as they kicked off attacking the sparsely populated McCathie Stand. The goalkeepers both had a quiet start to the match with neither side creating anything in the way of goalmouth action.Â Owen Morrison tantalised the right side of the visitors defence and after slipping the ball to Stephen Simmons Alan Hutton conceded a free kick that brought all the big men up for the eighth minute setpiece. Unfortunately Jim O`Brien`s lofted ball into box was too strong and Allan McGregor held easily.

Just four minutes later Simmons accepted a loose Ian Murray defensive header and then drilled a shot on target that McGregor did well to save.Â Kris Boyd had looped in a ball from the right that the Pars defence mopped up but Ferguson`s cross in 13th minute was headed down by Karl Svensson but Roddy McKenzie dropped to his left to save competently.

There was a let off in 16th minute when Novo broke through the left channel and fed the ball left for Charlie Adam.Â When the ballÂ came into the far post Alan Hutton`s effort came back off the back of Owen Morrison on the line and into the hands of McKenzie.

Next minute the Pars were celebrating their first goal in 467 minutes football. O`Brien`s free kick on the right was defended but the ball was switched left with Young`s headerÂ for Owen Morrison. He turned Julien Rodriguez to pick out Jim HAMILTON on the right edge of the six yard box.Â The Pars striker blasted the ball from his left foot into the far left of the Rangers net.

Rangers response came from a quickly taken free kick awarded for O`Brien`s tackle on Ferguson.Â Charlie Adam received and swung over a dangerous ball into the Dunfermline penalty box but Wilson rose to make a crucial headed clearance.

In 26th minute Stevie Crawford sent the ball wide right for O`Brien and when his delivery was played into the six yard box and Svensson belted the ball behind for a corner on the right. Scott Morrison swept this one over and there was a let off for Rangers when Phil McGuire`s header was kept out by Crawford and McGregor was allowed to gather.

Then three minutes later yet another Dunfermline goal!Â A throw in down on the right found O`Brien and his cross was headed only as far as Owen Morrison and his overhead kick was fired on target by SIMMONS. The shot pinballed off Svensson and Rodriguez before the ex Hearts midfielder followed up to smack the ball into the net.

Dunfermline kept up the pressure with newly introduced sub Chris Burke forced to head behind to give the home side yet another corner. Owen Morrison sent the ball in from the left but Scott Wilson headed wide right. McKenzie was back in the action however in 37 minutes out swiftly to thwart Novo`s progress into the left side of his box.

Next minute Dunfermline were denied a penalty when Ian Murray appeared to handle just inside his box. Before half time Chris Burke tried to lift his side with a couple of crosses in from the right; Gavin Rae headed wide left and then Boyd was picked out in a good position but he failed to control and the Pars survived.

What a fantastic first half from the Pars with Jim O`Brien making a big big impact. Having waited so long for an opening goal in a match the Pars notched two. Could this be history in the making?

Hamilton and Simmons resumed the action after a lengthy wait for Sky television to indicate they were back.Â Just as well they waited because within 30 seconds the Pars had another corner and another goal.Â Scott Morrison swung in a great delivery from the right and Phil McGUIRE rose just six yards out to fend off Hutton`s challenge and head in Dunfermline`s third goal of the cup tie after only 55 seconds of the second half.

In 52nd minute Roddy McKenzie held nicely after Wilson`s clearance dropped for Ferguson.Â He played the ball right for Burke who forced the Pars keeper to save. At the other end Hamilton twice and Crawford had chances as the ball was kept deep inside the Rangers box but McGregor saved the eventual attemptÂ from Hamilton.

Two minutes later however it was Ian Durrant`s Rangers who got the fourth goal of the game. A neat move on the right put Rae deep right and his cut back was clinically despatched beyond McKenzie by Kris BOYD. This further fuelled the cup tie with the Royal Blues launching an all out attack on the Fifers goal.Â

The Pars looked dangerous on the break with Crawford and Owen Morrison having chances to shoot. Kris Boyd had the ball in the net again in 63 minutes but he was rightly penalised for a push on McGuire that gave him the free header fromÂ eight yards. Rangers brought on Thomas Buffel and Stephen Kenny substituted Calum Woods for Owen Morrison.

It was Rangers who took the inspiration however as Kris BOYD headed in an Ian Murray cross from just three yards out at the far post. Twenty two minutes remained for the Gers to find an equaliser against the bottom of the table, Pars. In 71st minute Barry Ferguson headed a Burke corner kick on to the top of the crossbar as it was clear that it might be a real backs to the wall end to the match.

Boyd swept his shot just a foot wide of the left post in 73 minutes and then Ferguson had a shot that McKenzie dropped to save. The pressure continued to be turned on Dunfermline with Buffel in particular causing mayhem. The defending got desperate and scrappy but the Pars into the final seven minutes with the one goal advantage after Hutton blasted high.

Freddie Daquin came on for the exhausted Hamilton. It continued to be all towards Roddy McKenzie`s goal. Rangers were appealing for a penalty when Wilson held Boyd down then Buffel was caught offside. The closing minutes including the three added were nerve racking but the cheers at the final whistle were all to come from the supporters of Dunfermline Athletic.

What a show from Stephen Kenny`s men; having won FAI Cup in December with Derry City, he really does have the magic for Cups. Only Dunfermline`s second ever Scottish Cup victory over the Ibrox side.Â The next round is on 3rd/4th February.