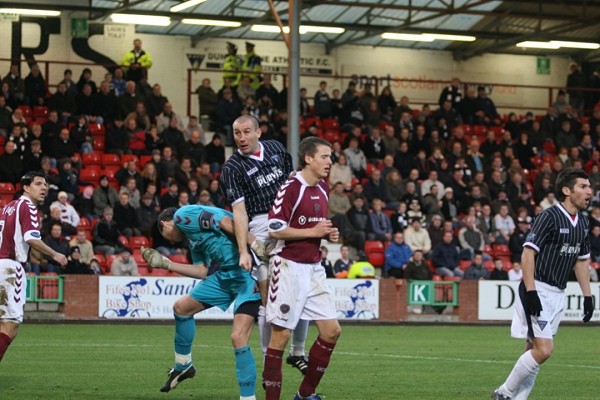 Roddy McKenzie for Dorus de Vries and Scott Morrison for Scott Muirhead, the only changes from the starting line up at Easter Road. Hearts preferred Lee Wallace to Takis Fyssas and 19 year old Calum Elliot returned to East End Park for the second Tuesday running following the completion of his loan spell at Motherwell.

The Pars huddled lasted slightly longer than their opponents before they kicked off 2007 at East End Park attacking the goal at the Cowdenbeath end.Â It was the home side who got in the first attempt at goal in 5th minute, Souleymane Bamba lifting the ball through to Stevie Crawford on the edge of the Hearts box and then hittingÂ Christophe Berra`s defended ball wildly into the Hearts support.

Three minutes later Bamba picked up a Hearts header and hit a low dipping shot from 23 yards that Craig Gordon turned around his right hand post for a corner. The next chance in 14th minute came after Mark Burchill forced Berra to concede a throw in down near the corner.Â Stephen Simmons found Greg Shields and he sent over a good ball that came off Bruno AguiarÂ to reach Crawford on the edge of the six yard box but the outstreteched Gordon held the shot.

Next minute Phil McGuire did well to deflect a fierce Andrew Driver cross behind for a corner on the left.Â Aguiar fired the ball through the six yard box and Michal POSPISAL was lurking at the far side to turn the ball past Morrison on the post.Â Pospisal`s tenth goal for Hearts, his sixth against Dunfermline!

Marius Zaliukas hit the post from the next Hearts corner but the Pars did rally to push forward and keep play deep down the right. Gordon came and collected when the ball was eventually crossed but there were signs that the home side were prepared to fight hard to retrieve the game.

A Bamba pass right to Mason in 27 minutes was played into the box for ShieldsÂ but ElliotÂ was back to defend.Â Morrison and Young carved out the next chance but Darren`s shot from 25 yards was well off target. Another promising move from Bamba and Mason ended with Crawford caught offside.

Five minutes from the break Hearts had two golden chances to score a second goal.Â A neat passing movement from Elliot to Hartley was turned back for Pospisal to drive at goal from 20 yards but fortunately a defensive block kept him out.Â In the next move Hartley sprung the Pars offside trap with a run from midfield to find himself one-on-one with McKenzie but the orange shirted keeper came out on top.

In the second minute of added time a Takis cross was turned on to the crossbar by Pospisal and so the deficit remained just one goal with all to play for in the next 45.

There was a double substitutionÂ for the Pars when the team emerged afterÂ half time - Owen Morrison and Jim Hamilton replacing Greg Shields and Gary Mason.Â Hearts did not relent forcing two early corners at which the defence still looked puzzled by who was marking who.

Hartley got a snap shot in on 53 minutes but McKenzie plucked the ball out of the air.Â Next minute he knew little when Robbie Neilson`s cross was flicked over the crossbar by Elliot.

In 55 minutes Scott and Owen Morrison created the Pars first chance of the half feeding Jim Hamilton on the left side of the penalty box.Â The sub then teed up Crawford for a shot from 20 yards but Gordon held droping to his left.Â Owen Morrison soon produced more for his strikers to feed off but Hamilton was judged to be offiside as he turned the ball back across the goalmouth.

The home support were roused as they witnessed their team demonstrate true grit and determination. Crawford was yellow carded for crunching tackle on Berra on the hour, sustaining injury in the process.Â The interuption briefly took the sting out of the Dunfermline offensive.Â Young was also lucky to escape a yellow card minutes later when he stopped Driver in the centre circle.

A Owen Morrison break to send Crawford up the right earned Dunfermline a corner but Scott Morrison`s cross was easily defended and Hearts almost struck on the counterattack.Â Hartley looked odds on to score after Barasa had played him through but Young defended well to deny Hearts.

The 73rd minute touch from Hamilton was collected by Simmons on the 18 yard line but again Gordon held the shot. At the other end Aguiar hit an off target shot from distance and the belief that Dunfermline could take something out of this game was still very real.

Ten minutes from time a sweet move from a McKenzie kick out provided Owen Morrison with a shot on target that was intercepted.Â The ball had been threaded into his path after Crawford, Ross and Burchill had shown great skill to find the Irishman.Â Seconds later the ball broke kindly for Hamilton but presented with the best chance of the game he could not beat Gordon from eight yards out.

Burchill had the ball in the net after 88 minutes but the whistle had gone for a Hamilton challenge. The match ended with Pars pressure deep inside the Hearts half. Hamilton set up Burchill but no one could get on the end of his drive across goal and then Simmons drove a shot from 20 yards that was beaten away off a motionless defender.

In stoppage time Hearts had one final opportunity as Calum Elliot connected well on the right side of the box but McKenzie pulled off a fine stop.

It was a very spirited second half performance from Dunfermline but they just couldn`t find any way through the Jambos defence. If the Pars were not lying in such a poor league position, the effort against thisÂ Hearts team climbing into second position in the SPL as a result of the win, would not be seen as that bad. In reality it is another match with no points to show for it.