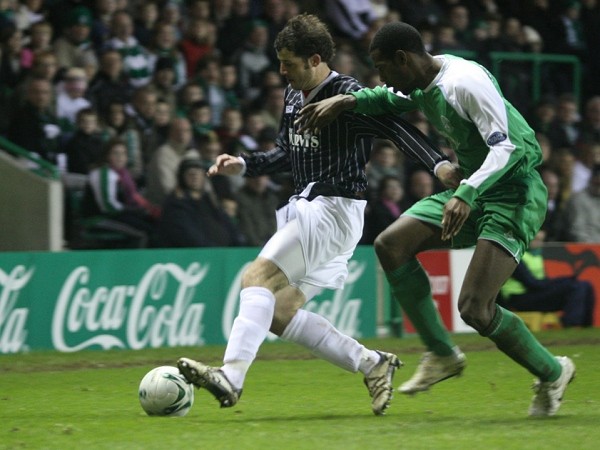 Stevie Crawford and Stephen Simmons returned in place of the suspended Jim Hamilton and Freddie Daquin. Phil McGuire and Greg Shields passed late fitness tests to play despite the afects of a flu virus. Hibs were without keeper Zibigniew Malkowski and the suspended Dean Shiels; 19 year old Andrew McNeillÂ made his Hibs debutÂ between the sticks, Steven Fletcher came into the teamÂ and Abdessalam Benjouleen exchanged his starting place with Jamie McCluskey.

Simmons and Burchill kicked off towards the Famous Five Stand and there was a loud roar of encouragement for the home keeper as he came out to hold cleanly a 55th second free kick flighted in from the right by Scott Muirhead.

Patiently the visitors played their way into the game and Crawford was unlucky to be pulled up for illegal use of his arm in controlling a fine through ball from Sol Bamba in 9 minutes.Â Hibs first chance came a minute later when Whittaker`s deep cross was met by Fletcher on the left side of the six yard box but his effort went back through the area without damage.

The home fans were howling in disappointment when Scott Brown screwed a good chance wide left from the edge of the box. They hoped for much better after de Vries could only parry away a 19th minute dangerous cross from the right off the boot of McCluskey. Thankfully the Hill o` Beath boy did not deliver, nor could be avoid the offside trap moments later when he threatened to head down for Killen on the top of the Pars six yard box.

Dunfermline were still not penetrating the final third of the park and their only visit to the Hibees penalty area came whenÂ a Burchill cross was headed behind by Whittaker for the Pars first corner of the game in 27th minute. Simmons launched that over from the left but Hibs defended with ease.

Similarly Dunfermline had nothing to fear from Hibs first corner of the afternoon five minutes later as Michael Stewart`s delivery was headed wide of the far goalpost by Steven Fletcher. Hibs were denied chances although Dunfermline collected three first half yellow cards in the process and Scott Wilson in particular played a crucial part in keeping Hibs out.

John Collins shuffled his pack for the second half reflecting his frustrations at his side`s inability to penetrate the defence of the SPL`s bottom team. Benjouleen and Thomson came on for McCluskey and Beuzelin and Hibs were in a positive mode from the restart.Â Both Thomson and Whittaker had shots at goal within the opening five minutes but neither had their sights properly set.

Hibs had certainly turned up the pressure but there was some slight relief as Mason played a through ball for Burchill that brought the all yellow keeper out to intercept at the edge of his box. Back at the other end the defence almost paid for being unable to clear cleanly and Stewart popped another long range effort that was again off target.

Gary Mason, already on a yellow card, was fortunate to escape another for his 59th minute challenge on an opponent. Next Shields conceded a free kick on the edge of the box and Rob Jones headed wide at the far post.

A very good chance came the Pars way in 62nd minute when Mark Burchill got deep on the left and his cross picked out Crawford but when he turned at shot from 15 yards out the ball was despatched inches wide right.Â As can so often happen DA paid dearly for the miss because Hibs strung together a fine move that was finished by Chris KILLEN who received Brown`s pass to wrong foot McGuire and thenÂ net withÂ a low driven ball from the top of the penalty box.

Hibs might have gone two up in the next minute but de Vries pulled off a fine save from Killen but unfortunately injured himself in the process.Â Roddy McKenzie came on and although he had made one interception to cut out a Hibs cross his next job was to face a KILLEN penalty.

The spot kick was awarded for a rather pointless handball fromÂ Souleymane BambaÂ as the ball flashed wide leftÂ off a Thomson corner from the right. The 25 year old New Zealand striker sent his right footed shot into the bottom right and Dunfermline were 2-0 down.

Gary Mason had an opportunity to get a goal back but was wide with his effort and then thankfully two Benjouleen attempts failed to increase Hibs lead. Hibs were getting plenty free kick practice but they got progressively worse with Benjouleen sending an 85th minute effort straight into the arms of McKenzie.

Dunfermline never looked like winning this game and really a 0-0 scoreline was the best that could have been achieved.Â After gifting the silly penalty there was no way back and now Dunfermline`s plight is able demonstrated by the sad fact that they have failed to score in the last 360 minutes of 2006.