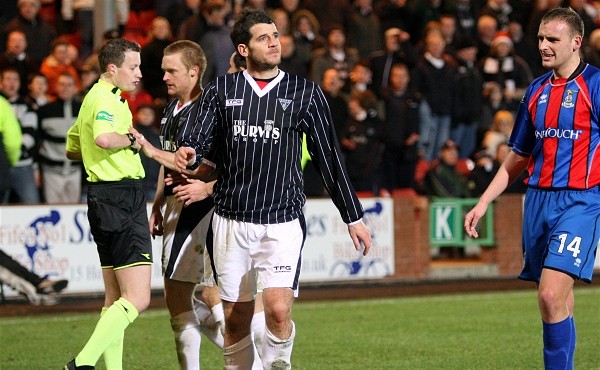 Souleymane Bamba returned from suspension to fit back into the midfield role that he undertook for all too short a time at Kilmarnock. Stephen Simmons and Mark Burchill were out through injury so that made room for the return of Jim Hamilton too.

Sammy the Tammy enjoyed the pre match waving his black and white chequered flag with glee possibly celebrating the absence from the Inverness starting line up of their top goalscoer Craig Dargo.

After the first home pre match huddle it was the visitors who got the match underway attacking the goal at the McCathie Stand end. Inverness settled faster but there was an early appeal from the home support when Dods towered over Hamilton inside the penalty area. Anywhere else on the park it would have been a foul.

The Pars tested Mark Brown after seven minutes when Bamba was gifted the ball in midfield and the break ended up with Stevie Crawford drilling a loose defensive ball low to the keeper`s left but he held with reasonable ease. The home support were further encouraged when Greg Ross made ground through the right channel to set up Gary Mason but a defender came across to concede a corner. Scott Muirhead`s ball in from the right was headed wide left by Phil McGuire.

de Vries was not seeing much of the action but had to be alert to head the ball over his crossbar as a spectulative shot looped high into his goalmouth. Then in 16 minutes the Dutchman dived to his left to hold an Ian Black shot on target from distance.

The match went through a period of stalemate with the midfields cancelling each other out. Dunfermline conceded the greater number of free kicks and both teams were forced into a series of misplaced passes. On the half hour a Hamilton flick on enabled Stevie Crawford to advance on goal but having beaten one defender Ross Tokely slid in to send the ball behind for a corner.

The Highlanders finished the half pressing for the opener. Black swung the ball right for Wilson and Darren Young was forced to concede a corner on the right. That was quickly taken and John Rankin shot into the sidenetting from the edge of the box.

Muirhead broke and Tokely was lucky that the referee decided his challenge on the edge of the area was legal. Both Muirhead and the protesting home support did not see it that way such that when Willie Collum blew for half time his Christmas greeting was very hostile.

The play was definitely missing some festive glitter and if the home support were to receive some Christmas cheer things would have to improve in the second half.

Five minutes into the second period, Greg Ross was the first to try and alter things with a shot from outside the box that landed in the stand. Tempers flared in the next minute earningÂ Barry WilsonÂ a yellow card, Scott Muirhead got involved and Young required treatment. All this upped the fervour and when Barry Wilson escaped the challenge of Young he raced in on goal forcing de Vries to make a good double block from both Wilson and Wyness.

On the hour Freddie Daquin replaced Greg Ross and immediately had the crowd chanting his name. He won a throw in on the right and from it the ball was flicked on as far as Mason on the top of the area but his shot was blocked. Four minutes later the Pars midfielder was in the thick of it when a scrum developed in the centre circle.

Ian Black reacted as he tackled Gary and then Phil McGuire dived in to separate the pair as they rolled about on the park. A melee then followed as more than a dozen players got involved. The referee flashed his yellow card at Black and Mason and to Dorus de VriesÂ for what we all assumed was tooÂ well a commandÂ of English as a foreign language. Apparently not, the referee yellow carded the keeper for rushing up from his goalmouth to separate his team mates.

Further cards followed for Munro and Hamilton as the whistler tried to get to grips with the torrid action. Black was substituted and ripped off his jersey as he left the field of play. Crawford was yellow carded for mouthing at the referee and the next minute shown red for his tackle on the right side of the Caley penalty box.

Down to ten men the Pars were put under pressure with two inswinging Caley corners but then it was back to a forceful attack on the Caley defences but there appeared no way through.Â Andy Tod came on for the closing minutes but found himself chasing the ball around as Thistle hung on to possession.

This was aÂ hard fought match in which few prisoners were taken. Possibly as big a blow as dropping two points was the red card for top scorer Stevie Crawford who will miss the next match against Motherwell.