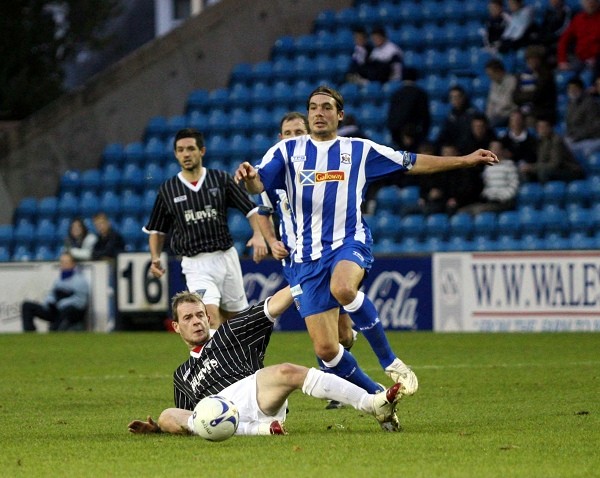 Dunfermline made one, enforced, change for the visit to Rugby Park, Stephen Simmons replacing the injured Darren Young and one tactical change with Greg Ross preferred to Aaron Labonte. Kilmarnock had ex Par Colin Nish back in place of the injured Gary Wales and Paul Di Giacomo started in place of Peter Leven.

Pars mascot No.25 Megan Baxter led out the Pars alongside Greg ShieldsÂ and one had to hope that the real no.25 Stevie Crawford would be leading the play as Dunfermline kicked off attacking the goal at the opposite end from their sparse travelling support.

Kilmarnock took the game to Dunfermline forcing a free kick on the left allowed Killie to exert the early pressure with Gordon Greer advancing further upfield than the Pars would like to see. The visitors were gifted a fifth minute corner when Garry Hay skied his clearance but Owen Morrison`s right footed inswinger from the left was easily held by the red shirted Smith.

It was Kilmarnock`s corner a minute later that created a rather soft opening goal.Â HAYÂ swung the corner inÂ from the right, the ball slipped over the heads of Greer and his marker, SimmonsÂ and the ball ended up in the net possibly off the head of Shields.

Fortunately the Pars struck right back.Â Scott Morrison was left to cross after Freddie Daquin had made a swift break out of defence up the left.Â The ex Dons` ball went through Stevie Crawford to Owen Morrison on the right side of the Killie box and his simple squared ball was clinically despatched from seven yards by CRAWFORD for the 11th minute equaliser.

The game did not weary with the Ayrshire side restoring their lead in 19th minute. A fine move from Colin Nish to Garry Hay ripped apart the right side of the Pars defence and when the Killie captain cut the ball back Paul DI GIACOMO had a fairly easy task to bulge the net with his shot from six yards.

The same Killie player, who was starting his first match since 5th August, took advantage of a Nish flick on from a long Smith punt to notch his second goal and Kilmarnock`s third in 25 minutes.Â DI GIACOMO rifled in a low drive from the angleÂ of the right side of the Pars box.Â Worse followed just two minutes later.

Scott Wilson fouled Nish out on the left side near the corner flag and when the free kick came over de Vries made a spectacular save to keep the ball out but Colin NISH was at the near post to compound the Pars problems.

After just 30 minutes, at 4-1 down, Manager Steve Kenny made his first substitution introducing Souleymane Bamba in place of Freddie Daquin.Â The youngÂ Ivory Coast manÂ took up an unaccustomed role in midfield with Crawford assuming a position further up the park.

The game began to look finished and half time arrived without further incident although Greg Shields had to be alert to clear a Hay free kick just before the whistle.

Johnston and Naismith got the second half underway and the Pars were soon defending two corners in quick succession.Â Bamba`s block on Di Giacomo`s shot at the second raised cries of penalty from the partizan support. Scott Wilson then did well to deny Invincible as a fierce cross came into the six yard box from the left.

Some wayward passes instigated chants of "you`re not very good" from the far stand. Matters unquestionably were not good but they got decidedly worse in 57 minutes when Sol Bamba was shown red.

The bigÂ man was certainly putting himself about but Referee Alan Freeland reached for his yellow card asÂ the 20 year oldÂ went down in a challenge. Bamba walked away from Naismith, complaining to the referee for giving the free kick. Naismith put his hands on Bamba who reacted and pushed back. Captain Hay and Di Giacomo both got involved and the big man merely brushed away all the hands that were being put on him. With the home support reacting savagely Alan Freeland reached for his red card.

Stephen Simmons kept Smith warm with a low driven shot on the hour but Kilmarnock still wanted more of their own. Dunfermline managed to break up what came at them but they were sorely missing the eleventh player.Â Even with a fair amount of possession at the midway stage Dunfermline could do very little with it.

Another Hay free kick in 72nd minute wasÂ directed into the Pars box, Greer`s headerÂ returned the ball from the left across the face of the goal and Colin NISH turned the ball in at the right post to make it 5-1.

There might have been more as Jamie Fowler came close at the left post but Hamilton did tee up Muirhead for a flick back into the path of Crawford at the edge of the box but like most things on this dreary December afternoon that just did not go right for the Fifers.

de Vries did well in 86 minutes to prevent Rhian Dodds turning in a Nish pass but by this time the game was well and truly over. Nish had two further opportunities for his hattrick but the final whistle must have been a relief.