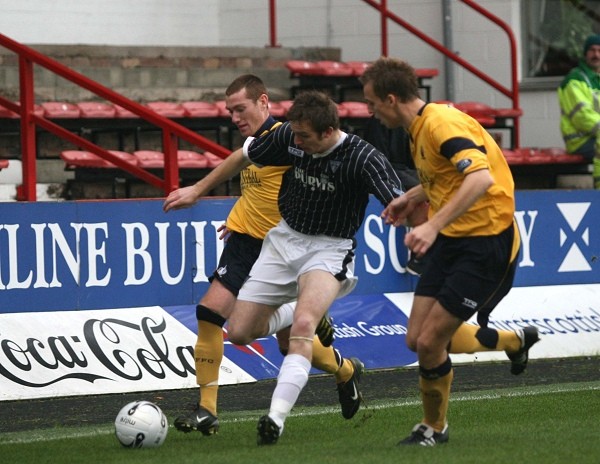 Greg Ross was the only change from the side that took a point at Tynecastle. Jamie McCunnie broke his foot during that match so his substitute continues in his place. Although recovered from injury Stevie Crawford found himself in the somewhat unusual surroundings for him, of the subs bench. Falkirk were unchanged from the eleven who overwhelmed Dundee United the previous Saturday.

As a result of losing a goal in just 36 seconds, Burchill and Hamilton were restarting the game a minute after the kick off. Falkirk had carved up the Dunfermline defence with Andy Gow delivering in a fine ball in from the left that Anthony STOKES received and drove past Roddy McKenzie from 8 yards.

The Pars came storming back forcing a corner in front of the Falkirk support and also having a penalty claim as Jim Hamilton`s knock down seemed to hit off Jack Ross` hand. Unfortunately that storm died down too hastily! In the seventh minute the same Ross lobbed over a long ball from the right touchline that slipped over Greg Shields head and Stokes was allowed a shot at goal from 15 yards that fortunately went wide of the right post.

At the other end when Steven Simmons squared to Owen Morrison, the Irishman fired in a shot that went straight to Lambers. Mason and Hamilton with some delicate skills both sent crosses in from the right but nothing that threatened the bright orange kitted keeper.

On the quarter hour Gary Mason`s tackle on Russell Latapy was penalised and the Trinidad and Tobago internationalist was given the chance to aim for goal but his 30 yard free kick was blocked by Darren Young in the Dunfermline wall. Falkirk turned up the pressure and pegged the Pars back. Steven Thomson created the next danger breaking in on the left side of the Pars box and despite to efforts of Ross and Tod to stop him was able to get in a shot that McKenzie did well to save.

A soft decision in 25th minute awarded Falkirk with a free kick on the top of the D in front of McKenzie`s goal. Latapy and Gow lined up but it was the latter who tried to blast his way through the Pars defensive wall. The ball broke to Stokes and there was relief to see the ball sent wide right by Stokes.

Three minutes later Simmons lofted a ball into the Bairns box and although Hamilton got his head to it the gloves of Lambers were soon clutching the ball. Dunfermline then produced a further three chances at least one of which should have taken.

Greg Ross won a corner on the right and when Morrison delivered Young had a good blast from 14 yards but the shot was deflected for a corner on the left. This time it was Simmons who took the shot but Gow drove that away. Next Young and Tod did the hard work to set up Simmons but this time, possibly an even better chance, the former Hearts man was wildly left of target.

Six minutes from the interval Falkirk came very close to doubling their advantage. Gow broke in on the left side of the Pars box and drove in a shot that was well blocked by the advancing McKenzie and Aaron Labonte blootered away the loose ball for a corner.

An O`Donnell challenge on Hamilton gave the Pars a free kick that Morrison floated into the Falkirk area. Toddy was up to direct the ball down but Lambers reacted faster than Mason and the last opportunity for a first half equaliser was gone.

It was a first half that Falkirk bossed, playing the better passing game with many different ideas when it came to attack. Dunfermline in contrast were too deliberate in their build up and even when they got themselves into promising positions failed to deliver the final telling ball.

Phil McGuire returned for the start of the second half taking the place of Steven Simmons in midfield. He was immediately involved heading on an early Dunfermline corner but the visitors closed out Hamilton as he tried to cash in. Falkirk were not to be suppressed however and Steven Thomson had an early drive that could well have hit the target but Tod deflected it for a corner.

Latapy was showboating deceiving several Pars challengers to push Gow through on the left of the Pars box. His squared ball was well set up for Bairns skipper Steven Thomson but he fired straight at McKenzie who had little time to move.

The home side were finding it extremely difficult to alter Falkirk`s dominance of the game so there was no surprise when Stevie Crawford was introduced at left midfield in place of Owen Morrison. Things immediately got worse however as Falkirk grabbed their second goal. A simple move through the middle let Thomson play a fine ball into the path of STOKES and he drilled in his ninth goal of the season.

Almost thirty minutes remained but the Falkirk fans were on song and enjoying some cheeky keepy-uppies from two goal Stokes down in front of them at the right corner flag.

In 68 minutes Jim Hamilton tested Lambers with a forceful header at the end of a Darren Young cross from the left. The Dutch keeper reacted well to thwart the Fifers, saved a close in header from McGuire and then moments later stopped Burchill as well. The match was boiling up and O`Donnell was yellow carded as the derby day atmosphere was turned up.

Falkirk might well have notched a third in 72 minutes when Gow caught out birthday boy Andy Tod at the byeline but McKenzie saved the shot when a lay off to Stokes would almost certainly have completed the on loan Gunner`s hattrick.

The 80th minute summed up the Pars luck. After a great opportunity when Burchill drove in a shot that was saved, came back for Mason who mis-hit but set up a return from the left of the box that Young left for Greg Ross. He connected really well but the ball rattled off the crossbar. Falkirk on the break fed Andy Gow and his perfect pass put in Anthony STOKES for his third and his second SPL hattrick in two games.

Many Dunfermline fans dispensed with the final ten minutes as they streamed out of their seats towards the exits and in a crowd of 6504 there were many more Falkirk fans left at ten to five.

They missed Greg Ross stopping Gow with another good break in on goal and of course, probably deliberately, missed the loud Falkirk celebrations at the end of the three added minutes.

Eight points then now separate Dunfermline from their rivals but on this kind of attacking play the south bankers can only expect to increase that. For the Pars there is a distinct need of new ideas and invention. Maybe there was a man in the stand watching who might be able to turn things around for this troubled team?