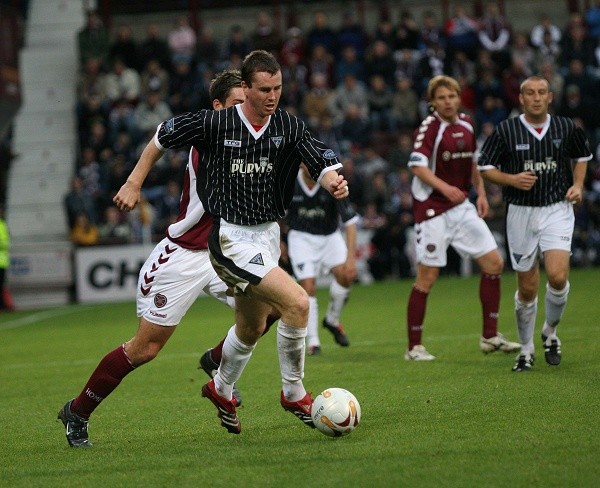 Five changes for the trip to Edinburgh - Dorus de Vries and Stevie Crawford were out injured, Sol Bamba, Greg Ross and Calum Woods dropped down to the bench meaning there were starts for Roddy McKenzie, Andy Tod, Jamie McCunnie, Stephen Simmons and Owen Morrison.

The opposition`s selection was of interest to the whole country with the rebellious triumvirate of Gordon, Pressley and Hartley surviving their statement on team matters to take their places against the Pars. Hearts showed two changes from the side defeated 2-0 at home by Kilmarnock the previous Saturday. Andrius Velicka and Jose Goncalves replaced Edgaras Jankauskas and Mirsad Beslija.

Hearts, after a lengthy teram bonding huddle, kicked off attacking the goal at the Roseburn Stand end where only a fifth of the seats were available for away fans. After only 90 seconds however it was Dunfermline who had the first very serious attempt at goal. Burchill made haste up the right and the ball was played in for Simmons to blast a good shot in from 16 yards that Craig Gordon beat away.

The Pars made a good start and even though the Jambos had two early corners there was never any danger to McKenzie`s goal. Hearts exerted some good pressure with Paul Hartley evading Darren Young to send Robbie Neilson to the byeline but Referee Winter decided goal kick from the cross that was challenged by both teams on six yards.

On 12 minutes Dunfermline leaked a comic book goal as McKenzie misread a long punt from Hearts captain Steven Pressley. The grey shirted Pars keeper came out to meet the ball as Hartley ran towards him but the ball bounced over him. He turned and managed to scoop the ball away off the line but Hartley`s backheeler from the right side returned the ball for VELICKA to prod into the net at the near post. There was some further panic in the Pars defence as Hearts kept up the pressure.

Cesnauskis troubled Labonte driving in on goal along the right byeline and there was relief when the cross was deflected into the sidenetting off Tod with 18 minutes on the clock. Next a free kick on the left was struck wide right from Morrison to McCunnie. He fed Mason who supplied a fine cross that Jim Hamilton rose to head but unluckily wide of Gordon`s goal.

Midway through the half Steven Pressley caught out Labonte as he slipped into the right side of the Pars box but thankfully his shot went wide to left of target. Next Neilson shot over after Cesnauskis and Hartley had played a short taken corner.

Dunfermline always had the potential to punish Hearts on the break and that almostÂ happened in 28 minutes. Hamilton picked out Mark Burchill who laid back an inviting ball to Mason. His shot was deflected wide left off Goncalves and Morrison`s corner was comfortably headed away.

There were some encouraging signs for the Fifers however as Burchill beat Pressley on the edge of the Hearts box but then took to firm a touch and lost it. There were weak appeals for a penalty as Burchill was then prevented taking the ball on as it seemed to break off a Hearts hand. Simmons and Mason took play deep into Hearts territory and McCunnie swept over a ball that looked to have deceived the defence but an offside flag was raised.

Simmons headed wide from a corner from the right and then McKenzie had to gather a well struck Neilson effort after the right back had travelled down the flank. The half ended with Pressley penalised for holding down his marker at yet another Hearts corner.

The second half got off to a stormer as Jim HAMILTON bundled the ball over the goal line when Owen Morrison`s corner from the left was headed down towards the left post by Simmons and amid several challenges the Pars striker got the equaliser. The 48th minute goal, only the second awayÂ from home thisÂ season, lifted the visitors and Morrison next launched over another dangerous ball in but Hammy was offside.

Hearts rallied bringing on Edgaras Jankauskas for Bednar. Cesnauskis had a shot blocked and then Jankauskas fed him another chance that he might have done better with but McKenzie saved with ease as he dropped to his right. A Hartley free kick from just outside the left side of the Pars box was headed down by Goncalves and again McKenzie came to the rescue.

In 62nd minute Owen Morrison`s ball in from the left was turned away by a defender but only as far as substitute Greg Ross. He picked out Hamilton at the far post but he was clearly offside and the `goal` was not to stand. Hearts kept pressing but there was now much more belief in the Pars ranks. Ross was allowed space and he tried a long range attempt that he failed to connect well enough with.

Christophe Berra turned a Hartley corner over the crossbar as he slid in. Morrison was really up for the game by now, taking on Neilson to win the Pars another corner and the home fans tried to raise their team as their indifferent home form looked to be continuing. The Jambos pumped balls into the Dunfermline box with Hamilton on more than one occasion back for serious defending. McKenzie was well up for a Neilson cross and then Young took a little heat off his defence with a shot from 25 yards that went wide.

Two Hearts corners were survived in 79th minute and thoughts were no doubt dwelling on the Vladimir Romanov`s threat to bin all his players if they lost to Dunfermline.

After he had clutched Labonte`s deflected header at a Hearts corner,Â a long throw from keeper McKenzieÂ sent Owen Morrison flying down the pitch. Neilson backed off enough to let the Irishman advance to 25 yards out from goal before picking out Burchill with a good pass that the unlucky striker sent wide to the right of Gordon`s goal from the edge of the area.

Three minutes from time Hartley thrashed an effort narrowly wide left and as the clock ran down everyone of the Pars players was back defending. Three added minutes brought loud cheers from the home support and in 92nd minute Robbie Neilson lined up for a piledriver of a shot from the right side of the box that caused Andy Tod to pull off a tremendous header on the line to save the Pars point, their first at Tynecastle since December 2001.

This was a well earned point with a great effort from all the players.Â Stephen Simmons, playing against his former club, had a superb match but Shields and Tod at the heart of defence and Darren Young for his task in keeping Paul Hartley quiet all deserve immense credit.Â Owen Morrison had a very good second half and Jim Hamilton`s first goal was coupled with some valuable defensive play.