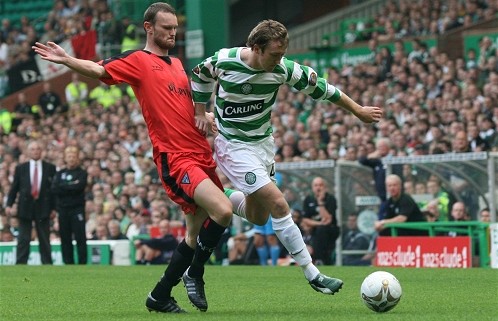 Dunfermline in search of their 15th league victory at Celtic Park went with two changes from the team that beat Kilmarnock in the previous SPL encounter. Owen Morrison was relegated to the bench while Calum Woods was out injured. This made way for Greg Shields to start his first match in five weeks and Souleymane Bamba came in to what would be a much more defensive minded formation.

Celtic were without Mark Wilson, Jiri Jarosek and Aiden McGeady from the side that took on Manchester United on Wednesday night in the UEFA Champions League. In came Paul Telfer, Kenny Miller and Shaun Maloney as they kicked off this 96th league meeting between the clubs playing west to east inside a very noisy Celtic Park.

It took just under three minutes for de Vries to be called into action diving to his left to turn a powerful Gary Caldwell 35 yard effort around the post. Two minutes later two corner kicks from the left delivered by Shunsuke Nakamura caused severe problems for the visitors with McManus` header deflected over the bar and then de Vries pulled off a fine save to deny Jan Vennegoor of Hesselink.

Nakamura popped up on the right in the 12th minute to send over a cross that Vennegoor of Hesselink headed over the crossbar from six yards and next de Vries had to hold a Maloney free kick fired at him from the left 25 yards out. Celtic kept up the pressure with Nakamura injecting pace to jink around Aaron Labonte but Phil McGuire rose to intercept the cross.

The 19th minute brought the heart into the mouth as Thomas Gravesen`s shot was blocked by de Vries and McGuire reacted fastest to blast the loose ball on the six yard line into the stand. That was where Shaun Maloney`s 22 yard free kick landed three minutes later after the good effort dipped over the crossbar.

Dunfermline had rarely been in the Celtic half but Labonte and Young built up a move that Hamilton just failed to return for Young on the edge of the box. Then with 25 minutes gone Young tested Boruc with a 25 yard shot that the Polish keeper turned away unconvincingly for a corner on the right. McGuire headed Mason`s corner over the crossbar. Jim Hamilton then headed a good Crawford cross from the right narrowly wide to the right of the Hoops goal. After that it was back on the defensive foot for the Fifers with Bamba forced into heading behind to give Celtic a corner on the right in 31st minute. This time Nakamura`s ball in was met by the head of Stephen McMANUS six yards out flattening Shields to net at the near post. Two minutes later de Vries matched Kenny Miller`s superb header at the end of a Telfer cross and then was quickly back in action to prevent Nakamura with a fine block 12 yards out. Dorus grabbed a Gravensen cross in the next minute as Dunfermline survived a real Celtic storm.

The right goalpost denied Thomas Gravesen a spectacular 30 yard goal 39 minutes into his Parkhead debut. The rebound was despatched over the crossbar by Miller as it became increasingly important to get to half time without losing another goal. The Fifers survived despite loud appeals for a home penalty when Telfer appeared to play the ball on to Bamba`s hand.

In 56th minute the Pars were allowed to pass the ball around deep inside the Celtic half with Simmons, Shields and Crawford interlinking before the Pars striker tried a shot that was unfortunately well wide left of target. The home support was crying out for their heroes to "waken up" and the visitors certainly made it look like it was cocoa rather in than tea that Gordon Strachan`s men had partaken of at the break.

The alarm clock looked like it had gone off as Miller turned a long throw in back for Lennon to blast just high and wide in 63rd minute. Celtic then introduced Aiden McGeady for Maloney and slowly the home team crept back into control of the match. The Celtic sub collected a defensive clearance to take a shot at goal from 16 yards but his 70th minute attempt was blocked and next de Vries held a long range effort and then held a dangerous cross ball. Telfer sent the ball wide right for Nakamura and McManus headed the cross over the bar then Lee Naylor swept the ball over from the left and Miller sent to ball over the bar and on to the roof of the net.

An 80th minute free kick awarded for Mason`s challenge on Nakamura gave the latter another crack at goal from 25 yards but he was high with his attempt before Maciej Zurawski replaced Kenny Miller. The second half was a much improved Pars performance, keeping the champions and their 55,000 supporters quiet for long spells. De Vries who was the Pars Man of the Match for his first half heroics had much less to do in the second 45 but at the other end Dunfermline never really got close enough to send anything past Boruc.