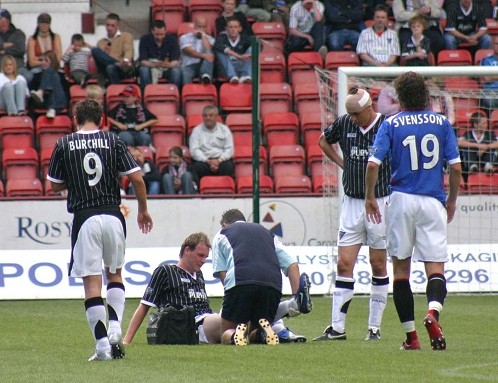 Rangers were unchanged from the team held to a 2-2 draw the previous Saturday by Craig Brewster`s Dundee United. That meant of course, the first ever visit to East End Park for at least half the visiting team. Dunfermline were without the injured Greg Shields (twisted knee) and Freddie Daquin (fractured cheekbone) but Andy Tod was back following suspension and Jamie McCunnie took Shieldsie`s place as he did at Falkirk when he came on as a 15th minute sub.

The sun came out as the kick off beckoned with Sammy starting his routine to "Armed and Extremely Dangerous". The furry mascot had no answer however to the striking problem facing the Pars and one was left hoping that the partnership of Tod and Burchill would come good for this first viewing of the season for Dunfermline Athletic live on Setanta.

Burchy and Gary Mason got the game underway East Stand after a lengthy pause for television`s OK and Mark Burchill was forward to pick up an Alan Hutton clearance and fire into the Stand from 20 yards after only 12 seconds! The promising start continued with Scott Wilson nearly getting enough on his header from Calum Woods free kick deep on the right. In the end the ball broke for Tod but his challenge was whistled for high feet.

Two chances then came Thomas Buffel`s way. The first came in 6th minute when indecision between Wilson and McKenzie let the Belgian internationalist in on six yards to send the ball narrowly wide of the right post. Then just two minutes later a misunderstanding between Bamba and Wilson almost proved fatal but Roddy McKenzie was out to thwart Buffel.

The Pars first clear cut shot in 11th minute was a 24 yard free kick from Stephen Simmons. Rangers lined up a five man wall with only Wilson, Bamba and Tod in the box, the ex Hearts man rocketed a shot through that Lionel Letiki held diving to his left. The keeper`s long clearance resulted in a Rangers free kick that McKenzie held from Libor Sionko. Next Sionko sent a dangerous ball in from the left and maybe it was fortunate that Charlie Adam used a hand as he tried to control the ball inside the six yard box.

Rangers first corner of the game in 17 minutes was cleared but at the expense of a head knock to Simmons. After treatment the midfielder was fit to continue but with the exception of a powerful run through Rangers by Calum Woods the Pars defence were kept fully deployed. The three at the back, that became five when necessary was working well but Sionko`s speedy run from the right playing a one two with his captain Dado Prso looked ominous in 27 minutes. Gary Mason put in a telling block as Sionko left go and when the ball broke to Phil McGuire, his clearance was belted off a Rangers player and canoned just outside the left goalpost.

Andy Tod had to leave the field in 34 minutes with blood flowing out of a gash sustained as he was squashed out in the Rangers penalty box. While down to ten men the home defence closed out a Rangers free kick from 25 yards out on the top of the D. The Ibrox side kept the Pars under severe pressure as half time got closer. A series of balls were cleared only for the Royal Blue shirts to collect and travel back towards the Pars goal.

Three minutes from the break a good delivery in from the right where Burchill and Simmons combined, was valiantly driven at by Mason but he could not get a connection as the ball whizzed through the six yard box. Toddy returned after two stitches that took ten minutes to administer and half time came without a score although there was a heart stopping moment when Muirhead`s pass back was light and McKenzie was swiftly out to blast the ball well into the Rangers half.

No changes for the second half and first opportunity to alter the scoreline came in two minutes with Sionko blasting a break off McGuire into the Rangers supporters behind the goal. Steven Smith received a Prso prod to burst through the right side of the Pars defence in 51 minutes. His ball in to Buffel evaded Bamba but Buffel was blown up for the illegal use of a hand.

The Pars first corner of the match in 53rd minute led to a dangerous Prso break on the Dunfermline two man defence but Scott Wilson got back well to put in an extremely good tackle. A 57th minute corner put Rangers in with another good chance but Tod`s presence put off Prso and Sionko despatched another ball into the stand.

Gary Mason was the hero of the next Rangers corner after Rangers had made a double substitution on the hour. Kris Boyd and Chris Burke came on and within three minutes Boyd had fed a neat pass into the path of Thomas BUFFEL on the right side of the box and the 25 year old slotted in at the far post.

Worse was to follow it would seem, as the Pars lost last season`s top scorer Mark Burchill with a groin injury and Owen Morrison came on in 66th minute. But matching the result of the Gers substitution, within three minutes MORRISON scored the equaliser. Letizi spilled a fine Simmons cross in from the right and the Irishman accepted the gift slotting home from six yards.

Suddenly Dunfermline saw their chance and pressure was turned up on the Rangers defence. Scott Wilson was deep into the opposition half and given time was able to release a good pass right for Mason to cut back from the byeline. Bamba just failed in the race for the ball and then Simmons had a crack at goal that was fended clear.

With 78 minutes gone Morrison swung in a high ball from the right that Letizi picked off Tod`s bandaged head. Rangers rallied as well and the game entered the final ten minutes at frantic pace. Buffel and Boyd made another chance and McKenzie`s footed save fortunately broke off Bamba into the orange shirted keeper`s hands. Sub Lee Martin went around Greg Ross but Wilson was quickly in to concede the corner and kill the threat. Dunfermline were hanging on a bit with lots of desperate but effective, defending assisted by some wasted Rangers chances.

In the end it was Dunfermline who almost snatched the winner three minutes into added time when Woods accepted a poor Burke pass and the ex Liverpool player thrashed a shot into the left sidenetting from 30 yards.

A great morale boosting point then for the injury ridden Pars team and hopefully just the tonic required ahead of the next two matches on the road at Dundee United and Aberdeen.