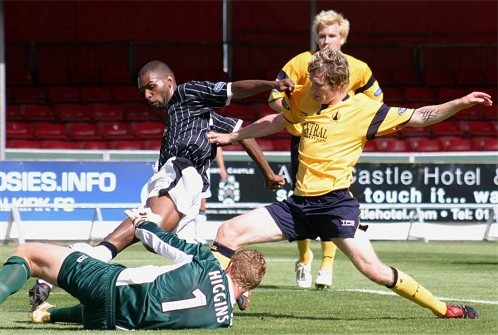 Both clubs made one change from the starting line ups the previous Saturday. Following suspension Falkirk brought in Patrick Cregg for Tam Scobbie and Athletic replaced the injured Noel Whelan with Mark Burchill. Andy Tod was missing, serving out his suspension for seeing red against Hearts.

1134 Pars fans populated the Kier Homes Stand at The Falkirk Stadium which now has a "North" Stand, albeit only covered half way up and actually on the east side of the ground. Mark Burchill and Stephen Simmons got the game underway with Dunfermline attacking the goal in front of their own fans. It was a cautious beginning from both teams with goalmouth incident not coming until the fourth minute with Higgins holding a Daquin flick at a Scott Muirhead corner and then Lima at the other end unsuccessully trying to convert a Pedro Moutinho delivery from the left corner flag.

The home support were ecstatic however in tenth minute when a Russell Latapy ball to Kenny Milne was poked forward for Alan Gow to force a corner on the left. Latapy whipped over the ball and Dareen BARR rose to head home from the edge of the six yard as Scott Wilson appeared to be flattened by Milne.

Latapy whizzed a 35 yard free kick narrowly over the crossbar three minutes later while at the other end A good square ball in from the right looked perfectly placed for Mark Burchill to crash home but his effort from 12 yards cleared the crossbar. A further blow at this stage was the loss of Greg Shields; the Pars captain twisted his knee in the 8th minute in a harmless looking tumble and after treatment and a few minutes back on the park he had to hand the armband to Gary Mason and yield his position to Jamie McCunnie.

Falkirk continued to have the better possession with Bamba`s clearance dropping kindly for Lima and then Cregg driving wide a corner kick from the right.. Muirhead and Simmons almost produced something for the Fifers but that and a subsequent Muirhead ball in from the right failed to make a difference.

When Roddy McKenzie failed to hold a 26th minute Moutinho shot, two corners came the Bairns way. The keeper fisted away the second only to allow Cregg a crack at goal from 25 yards out but fortunately his sights were set too high. Falkirk kept going and Bamba put in a telling tackle deep inside his own area to prevent Gow`s pass to Lima being squared.

Simmons cross in from the right ten minutes from the break was not taken by Higgins but Freddie Daquin was not to provide the equaliser indeed as play switched back to the other end Gow had a glorious chance when Muirhead`s challenge saw the ball break for him to send in a powerful low drive that McKenzie held.

Gregg and Milne exchanged a few passes before urged on by the home support Milne push through a nice pass that Vitor Lima despatched over the crossbar. Next with Scott Wilson in close proximity to Moutinho, Latapy chose a defence splitting pass putting in Gow with Bamba in his slipstream but again the shot was fired over the crossbar.

Dunfermline had a real push for an equaliser as half time beckoned. Muirhead picked out Burchill but he was wide right from 25 yards out. Then Stephen Simmons had a great chance after Bamba had won the ball in the Falkirk half but the Bairns keeper came out to block and when Burchill gathered the ball on the right to cross, Daquin`s header went over the bar.

Early second half play did not offer much joy for the travelling fans with them getting too close a view of the action in front of the Dunfermline goal. When Craig`s 49th minute attempt at a cross was deflected behind off McGuire, that allowed Latapy to create further danger with his inswinging corner being punched away by McKenzie. Two minutes later Latapy raced away from his marker, Mason, to belt a low drive in on target that McKenzie held well dropping to his left.

The Pars began to battle and a nice 54th minute move from Mason to Simmons to McCunnie was punctuated with a ball in from the right that Daquin headed on only for the keeper to concede a corner. Mason`s tackle on Lima on the edge of his own box earned him a yellow card and Latapy shot the free kick over the all and over the bar.

At the other end Mason nearly carved out the much needed equaliser linking up with Muirhead before lofting the ball to the left side of the Falkirk box where Simmons rose to nod on target but the challenge of Burchill close in sent the ball over the bar. When Stephen Simmons intercepted a weak pass from Karl Dodd it looked that the ex Hearts man cold punish the mistake but he laid the ball off left for Daquin as he met the 18 yard line and Dodd was back to redeem himself. Daquin and McGuire attacked a 72nd minute corner from the right but the ball flashed wide right.

As the match entered the final 15 minutes Dunfermline fought even harder for the equaliser with Muirhead, Simmons and Mason closing down the midfield and keeping play well up the park. Lima`s foul on Simmons let Scott Muirhead drive a low ball into the penalty area from the free kick but McGuire and Bamba could not get the control on the ball required to test the keeper.

Owen Morrison and then Craig Wilson came on for the Fifers. Both sides had chances in the closing minutes with Gow making McKenzie do all the work and the Pars could not prevent the Bairns holding on for their first ever win over their auld enemy at their new stadium.

If only Mark Burchill or Stephen Simmons had put away their good first half chances how different things might have ended up.