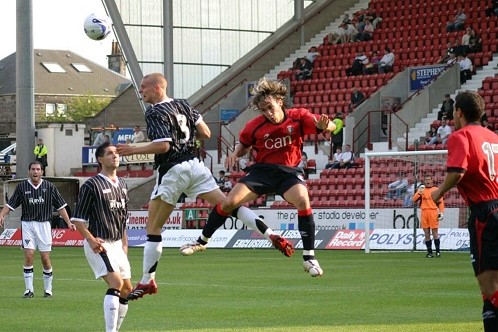 Dunfermline welcomed Spanish opposition to East End Park at the unusual time of 6.15pm. to accommodate the return flight to Spain later in the evening. The visitors made six changes from the starting eleven at Murrayfield the previous night when Hearts won 2-0.

Jim McIntyre was out with a shoulder injury and Scott Wilson was missing with a thigh injury but there was first outings for Calum Woods and Phil McGuire. Aaron Labonte and Gary Mason returned to the team after injury and 21 year old Ivory Coast trialist Souleymane Bamba was on the bench.

The sun came out as `The Final Countdown` faded out and those that keep the economy ticking over made their way to their seats. Dunfermline started attacking the Cowdenbeath end and in the 5th minute Freddie Daquin was played into the right side of the box to test the keeper Juan Elia Vallejo with a powerful shot that he turned around his near post for the first corner of the game. McGuire was on hand to attempt to capitalise when Vallejo dropped Muirhead`s cross but Dougie McDonald whistled for the former Aberdeen defender`s over enthusiasm. In the 13th minute Gary Mason was dispossessed midway inside his own half by no.24. The tall forward played the ball wide right before hitting the return to the outside of the left post from 18 yards out. At the other end Scott Muirhead had a shot at goal but his attempt failed to trouble the keeper en route for the East Stand. Two Osasuna corners on 24 minutes were successfully defended before Muirhead broke down the right side, evaded a tackle, played the ball off Morrison and then delivered a cross that a defender headed behind from 6 yards. McGuire narrowly failed to get his head on the ball as the corner came in from the right.

A forceful Simmons header sent Daquin up the right flank and with a burst of speed he was soon at the edge of the Osasuna box where he played in Burchill to tee up Simmons with a drive that was blocked out by the defence. Roddy McKenzie was having a quiet time and was happy to come out and pull off an impressive block even when the offside flag was raised.

There was five minutes to the break when a Dunfermline effort came closest to breaking the deadlock but Simmons glancing header on to a Muirhead corner slipped ever so narrowly over the crossbar. Daquin had a wild shot after Morrison and Labonte had exchanged passes inside the Osasuna box.

It had been a good first 45 from the Pars, Osasuna had looked strong when they enjoyed possession in the middle of the park but lacked ideas when they got nearer goal. Dunfermline had more goalmouth incidents and more shots at goal.

One change at half time Phil McGuire moving into midfield to replace Stephen Simmons making room for trialist Souleymane Bamba to take up a central defensive role alongside Greg Shields. The second period was slow to ignite with only Referee McDonald`s ticking off of Shieldsie for an unfriendly tackle raising the temperature.

Morrison came off in 59 minutes meaning Daquin was tried as striker and just five minutes had past when the Frenchman raced down the left channel to place the ball along the 18 yard line but Gary Mason just failed to reach the chance. Daquin and McGuire then came off and youngsters Smith and Phinn replaced them. Osasuna came close with a header and then a looping shot but the pace of the game went a bit flat as 70 minutes went on the clock.

Good defensive play by Bamba and then McCunnie, prevented a Spanish shot from the centre of the D as they promised a rocket. A McCunnie- Mason - Phinn move forced a corner but Muirhead`s ball was headed clear long before it could reach the tall target of Bamba. The long legs of Bamba were back to stop a low drive at McKenzie and Dunfermline were able to string together a number of nice passes that raise hopes for the SPL season ahead.

Three minutes from time the home support were thrilled as Bamba spectacularly met a Muirhead corner in from the left but his volley from eight yards was well off target.

The Pars defence came through the game well cutting out almost everything before McKenzie could get involved. With Scott Thomson, Darren Young, Andy Tod, Scott Wilson and Scott Morrison still to to fit to feature suddenly things are looked a little sunnier for Leish`s team.