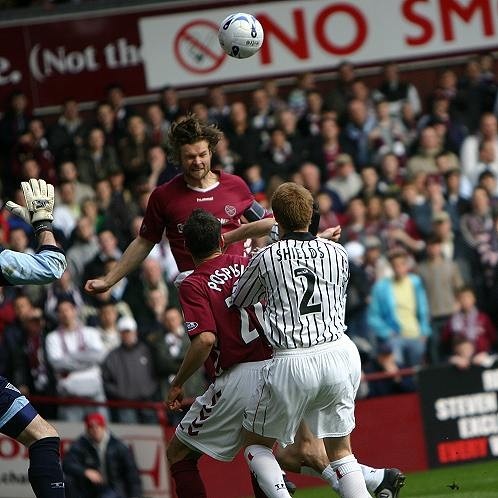 
Andy Tod came in for the injured Gary Mason (hamstring), that being the only change in Jim Leishman`s starting line up from the team that faced Falkirk the previous week. Hearts made four changes from the side that finally lost the championship race at Celtic Park in midweek.

Tynecastle was in party mood to welcome the Scottish Cup Finalists home. The Hearts supporters were issued cards to hold up as their team emerged; 1886 against a maroon background was the message celebrating 120 years at Tynecastle. History perhaps but it was a historic result that the Pars were seeking, their first at Tynecastle since February 1990.

It was the visitors who kicked off defending the goal in front of their own fans but within 20 seconds Deividas Cesnauskis was allowed a strong run that he punctuated with a sharp shot from 25 yards that whistled narrowly wide left. On two minutes Referee Charlie Richmond played advantage as Hartley was fouled and Mikoliunas brought a fantastic save out of Allan McGregor.

Two dangerous corners followed and Hunt did take a little pressure off his defence with a shot straight into Gordon`s arms but it was soon back at the other end again. Hearts players were finding it hard to keep out of each other way, there were so many forward as Hartley won a throw in down at the right corner flag.

Robbie Neilson delivered one of classical long throws and Hearts were one up. The seventh minute goal came when the thrown in sailed over Scott Wilson on the edge of the six yard box and Michal POSPISAL nipped in before Aaron Labonte could react.

Hearts second goal was only a further seven minutes away. Andy Tod booted clear as Mikoliunas and Hartley pushed play into the Pars penalty area. From the throw in Robbie Neilson this time received and swung over a high ball into Pars penalty box that Roman BEDNAR rose to head into the left side of the Pars net.

Dunfermline found themselves kicking off for the third time within the opening quarter of an hour and it might have been four just five minutes later when a chip in from the edge of the box from Mikoliunas was well, but desperately fisted clear by McGregor.

A Muirhead free kick went behind off a Hearts defender for Dunfermline`s first corner of the game at the midway mark in the first half. Pressley headed away and it was back on to the defensive. Hartley sent it a low free kick as the Pars had all 11 men back within their own 20 yards. The ball was sent for another throw in on the right. A short taken one let Neilson pick out MIKOLIUNAS and he drove home at an angle from 12 yards with 25 minutes on the clock. Despite the five men strung out along the back, McGregor was called upon to prevent the fourth Jambo goal in 29 minutes, sprinting out of his box to smack the ball away from the advancing Pospisal. The Fifers goal was still under siege as Fyssas got to the byeline on the left and despite Tod`s backheader picked out Bednar. He gathered, composed himself and rocketed in a shot that McGregor beat away.

As half time approached Dunfermline were given slightly more possession and got up the field as Hearts drew their breath. The next shot was again from Mikoliunas. The 40th minute effort thankfully was wide left, there was a Neilson header at a Muirhead free kick from the right trackside that Gordon had to hold. Hearts continued to control the play the half time whistle was a welcome relief although Mark Burchill forced Gordon to save a stoppage time effort that was Dunfermline`s best of the first half. Hearts were out first for the restart as the sunshine, earnestly seeking more goals to boost their Champions League place. It took five minutes before Takis Fyssas hit the byeline to cut back as Tod challenged. The ball into the six yard area was cleared off Bednar by Greg Shields and the scoreline remained the same.

A Muirhead free kick was played into the Hearts box but the Fifers failed to create any danger. That could not be said of Aguiar who enjoyed a couple of opportunities on the right before drilling in a low shot to the near post that McGregor held. On 55 minutes Aguiar had another shot that cleared the left goalpost.

On the hour mark Andy Tod headed a Scott Muirhead corner from the right over the crossbar but that was the closest the Pars were to come. Scott Thomson battled a route around the left of the Hearts box but Goncalves easily turned away the cross.

Hearts had gone quiet as Ross conceded a corner in 66th minute. Both sides took the chance to bring on substitutes meaning that Bartosz Tarachulski came on for Noel Hunt. Dunfermline then survived a Cesnauskis run and lay back to Aguiar that McGregor spectacularly saved.

Brellier took out Labonte down on the right but Muirhead`s ball into the box that was knocked back by Thomson but easily cleared. The three Hearts subs took a bit of the bite of the Edinburgh side and only Cesnauskis kept up the pressure. Indeed it might well have been that the Pars had begun to contain Hearts better. Big Bart ruffled up the Jambos and territorially Dunfermline were winning more.

In 79 minutes Goncalves downed Burchill on the right edge of the Hearts box. Muirhead again delivered the ball into the danger area but Brellier got to the cross before Tarachulski. Hearts 8th corner of the match four minutes later was directed into the six yard box where MAKELA rose to head the ball into the Pars net to make the deficit four.

There was nothing for the Pars at Tynecastle. A 86th minute red card for Greg Ross for a tackle from behind on Aguiar and with news of both Livingston and Falkirk in winning, the day was one Dunfermline Athletic just did not need. Eight points ahead of Livingston and five bottom six matches yet to come.