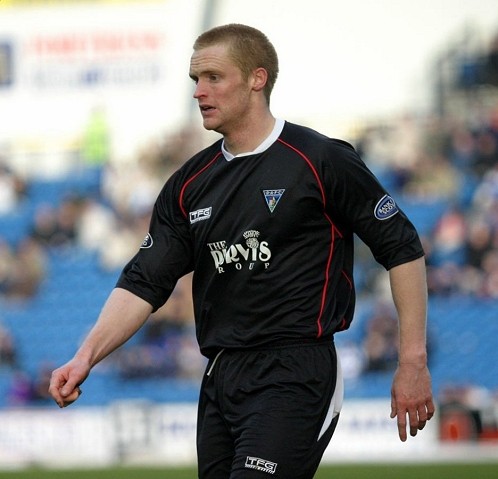 Darren Young and Stephen Simmons were out injured and Yannick Zambernardi dropped to the bench as Dunfermline took on fifth placed Kilmarnock at Rugby Park. The home team were without their top scorer Gary Wales and Steven Naismith was suspended. Alan Combe returned in goal as Kilmarnock kicked off attacking the goal in front of the empty Chadwick Stand.

Play was direct towards Allan McGregor`s goal and within 35 seconds the on loan stopper had to parry a fierce Colin Nish shot from the right side of the box. Both sides had early corners and on five minutes Craig Wilson squared an inviting ball into the centre of the opposition box but Scott Muirhead failed to connect.

Kilmarnock were able to spray the ball wide with ease and on the second occasion Gary Locke picked out Lindsay Wilson out right. The Aussie, on loan from PSV Eindhoven, made ground before sending in a high ball that Paul Di Giacomo rose above Aaron Labonte at the far post to head on goal. McGregor failed to cut out the cross but was thankful to see Greg Shields head off the line but INVINCIBLE squeezed the ball in as Tod and Shields tried to block. The ninth minute lead could have been doubled four minutes later when Jamie Fowler was set up on the edge of the box but this time the defence was successful. Jim Jeffries side were comfortably in control and Shields was kept extremely busy. Nish had another really good chance after 25 minutes when Di Giacomo`s pass from the left was dummied by Garry Hay but the ex Pars man shot from 25 yards straight into the clutches of McGregor.

Allan Johnston run into the left side of the Pars box was halted when Shields made a strong blocking tackle. A Dunfermline free kick in 34th minute brought an all too rare visit to Combe`s penalty box but Toddy`s header did not trouble the red shirted keeper.

When Lee Makel`s corner from the left was fisted clea, it was back to more Killie possession with the Pars chasing around unsuccessfully. McCunnie`s efforts to halt Fowler did not prevent him feeding Di Giacomo a chance that won him a corner and it was him that blasted the delivery high over the crossbar. Invincible threatened again in 43 minutes and yet another corner was conceded. A free kick flashed through the Pars box before but the half time whistle gave the management team a chance to inject some necessary urgency into their side.

It was like the old days with numbers 9 and 10 getting the second half underway for the Fifers. A Hunt header brought Combe into action within 60 seconds and then a Makel free kick kept the Pars further forward than they had been most of the first 45.

A high Andy Tod clearance was won by Gary Locke and the Killie captain broke into the right of the Pars box forcing a shot that McGregor blocked. Next minute Nish narrowly missed a long through ball and the ball slipped wide of McGregor`s left hand post. Invincible had the ball in the net in 51st minute but the home fans celebrations were short lived as an offside decision went against them.

Mark Burchill swept the ball into the Killie net minutes later but he was adjudged offside as he ran through on Hunt`s header. In 57 minutes another offside flag against Burchill denied the Pars of another good chance. Things were beginning to look more positive for the Pars but they required a fantastic kick off the line to keep them in the match. McGregor came out to the edge of his box and misread Shields play back letting in Di Giacomo for a shot that was looking destined for the net until Shields` interception.

Makel and Thomson kept play around the Killie box but Dunfermline were finding a route to goal impossible. Hunt tested Combe with a shot from outside the box and then McGregor was kept alert with a Di Giacomo shot from 30 yards. Allan Johnston cross from the left wing was well tipped away from the inrushing Killie attack. 
With 72 minutes on the clock a fine lay off from Burchill to Hunt saw the Irishman shoot at Combe but a better option might have been Muirhead in the centre of the box. Having needed treatment for a dead leg Hunt was later subbed by Frederic Daquin. Nervousness appeared to creep into the home side`s game as the match entered the final ten minutes.

A foul on Daquin set up free kick on the right that Makel sent into the Killie box. It was Shields who was up to win the challenge in the air and there was an almighty scramble as the defence kept the Pars out. Bartosz Tarachulski replaced Craig Wilson and he nearly nicked an equaliser heading wide from a Makel corner.

Andy Tod headed a late corner over the crossbar and it was to end 1-0. The second half showing was greatly improved for the Pars and they probably deserved a draw in the end.