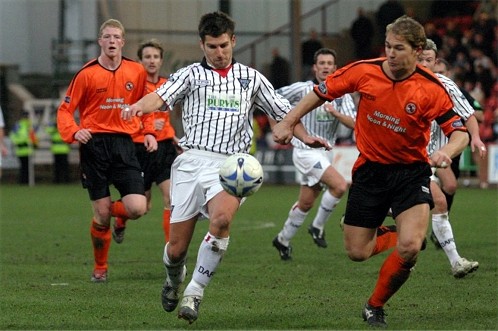 After the disappointment of the previous Sunday`s result against Celtic, Dunfermline welcomed this SPL fixture, brought forward because of the club`s CIS Cup Final appointment against Celtic on Sunday 19th March. Not surprisingly there were five changes to the starting line up. Scott Wilson was out suspended but Greg Shields was back to fitness to fill that role. Keeper Allan McGregor returned in place of Bryn Halliwell; Gary Mason and Scott Thomson were out through injury, Scott Muirhead returned, Andy Campbell dropped to the bench and Jamie McCunnie was not in the squad.

Craig Brewster, still chasing his first victory as Dundee United Manager was without the services of suspended David McCracken, but Barry Robson was back having served his. Charlie Mulgrew, Jim McIntyre and Paul Ritchie were all out injured but former Dundee player, Lee Mair started in defence. Inverness Caley Thistle hit four past United in the last match so it was expected that both teams defences would be instructed to keep things as tight as possible.

As Dundee United kicked off, the Pars attacking the McCathie Stand end were hoping to record a win that would take them nine points clear of bottom club, Livingston. Mark Burchill chased a first minute clearance into the box but he was snuffed out before he had a chance to test Derek Stillie. A United corner in the sixth minute brought the visitors no joy but when Aaron Labonte was penalised for a challenge on David Fernandez out left the free kick gave the visitors an opening that they gladly took.

Barry Robson floated in the free kick to the far side of the six yard box where Scotland U19 internationalist Garry KENNETH rose to head the Tangerines into an eighth minute lead.

Fernandez escaped the tracking of Scott Muirhead four minutes later to lay back an inviting ball to Grant Brebner. The former Hibs man connected well but fortunately the Pars defence blocked. It was looking decidedly one way traffic until against the trend Noel Hunt was sent wide up the left wing bvy Muirhead. Derek Stillie came rushing out of his box giving Noel the option to centre. Mark BURCHILL was perfectly placed to chest the ball into the open goal and the Pars were back level in 14 minutes. At the midway stage of the first half the match was wide open with both teams competing like they had forgotten that this was not a cup tie like all the other games that afternoon. Mark Kerr took advantage of a poor Burchill lay off to set up a good chance for United but after some nice interchanges it petered out with his weak shot at McGregor from 20 yards.

Confidence seemed to deserted Derek Stillie and Scott Muirhead tried a long range effort from the left touchline that the ex Pars keeper was happy to see land on the outside of the roof of his net. United came forward and pumped the ball into the Pars box but thankfully the defence was doing better than against Celtic and McGregor was not called upon until David Robertson worked his way past Zambernardi only for the blue shirted stopper to come out and smother.

Noel Hunt teased the right side of the visitors` defence prompting Burchill to step in and deliver a great ball from the left byeline. Craig Wilson laid it back for Hunt but his side footed shot was easily blocked. Back at the east end two United corners from Robson kept the Fifers under pressure but nothing that they could not deal with. Darren Young did particularly well to steal the ball off Brebner after Robertson had sent a decent ball into the right side of the Pars penalty area. Stillie spilled a 25 yard Burchill shot just ten minutes from the break and his defence had to step in to blast the ball away from the predator Hunt. Territorially Dunfermline finished the half better but there was little to force Stillie into action. Darren Young, never one to be shot shy tried a lifted effort from the right corner of the United box but was well wide of the mark to the left.

The second half was just over two minutes old when Craig Wilson was gifted a chance from a poor Lee Mair header on the edge of his own box. Craig collected and travelled a few paces into a central position before shooting low to bring a save out of Stillie. Burchill had a headed effort and a shot that Stillie had to react to before Muirhead sent in a corner from the left that Lee Miller headed away.

It was a much better start to the second half for the Pars. In 54 minutes Simmons was injured in a tackle that earned the Fifers a free kick that Young blasted wide. 18 year old Greg Ross came on for Simmons for his 34th appearance for the Pars. A Scott Muirhead corner from the left founded Darren Young but his net bound header was cleared off the line by Brebner.

A free kick from the left was then headed over the crossbar by Ross from six yards and that cued a spell of United dominance that never really caused the Pars any problems. Play got bogged down in the Pars half and the 70th minute came with little of consequence to report. Frederic Daquin was brought on for Wilson and Hunt won a corner on the left. Had the cross found Andy Tod`s head instead of his boot we might have got a better result but again the Pars were off target and Stillie was untested. Sub Frederic Daquin sets off down the wing

A Pars winner was almost made in France when Zambernardi swung over a useful ball that Daquin headed narrowly wide in 76 minutes. A Daquin cross from the right a minute later saw Burchill get a flick on forcing both Duff and Robertson into acrobatic clearances. Re-awoken Dunfermline kept coming forward with Muirhead sending a Hunt lay off over the cross bar from 25 yards.

United have not won at East End Park since 1997 and apart from a short first half spell, they rarely looked like changing that record. For Leishman`s troops a point was welcome but maybe should have liked more. To get more you need to score goals and the two Pars and one Arabs second half shots on target never looked likely to change the outcome.