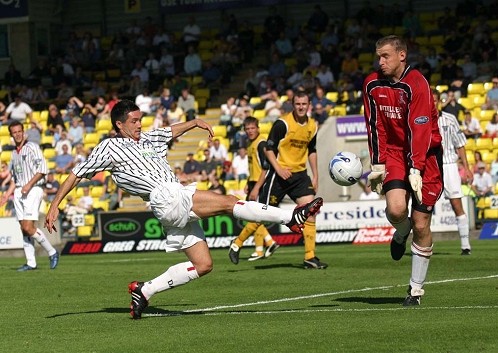 
Bright sunshine welcomed Dunfermline to the Almondvale Stadium as they attempt to get their first victory at Livingston in almost six years. Livingston had the upper hand last season taking eight points and remaining unbeaten over the four games. This term Livingston have yet to score in the SPL and the sight of the all in white "Chariots of Fire" style Pars in warm up must have seemed relief to the club propping up the SPL after three matches.

The horrific tackle by Ramazan Ozcan on Scott Morrison in the Scotland U21 international against Austria leaves Jim Leishman with a problem on the left side that Iain Campbell was given first opportunity to fill. Scott Wilson returns after suspension replacing Andrius Skerla, Aaron Labonte was in for Scott Thomson, injured in training on Thursday and with Simon Donnelly out with a hamstring injury Bartosz Tarachulski got his first start. Paul Lambert came out of retirement to make his debut for Livingston.

The Pars fans were packed into the north east corner with the stand behind the goals on the north end empty as Livi kicked off defending the goal at that end. Bryn Halliwell was the first keeper to be involved clutching a Jason Dair cross from the left after Paul Lambert had orchestrated a movement out left.

It was the home side that forced the first corner of the match in the 4th minute when Martin Scott`s cross from the left was headed behind by Campbell. Dair`s delivery was headed clear by Tarachulski. Dunfermline`s first real push forward in 10th minute won them a corner out left after Shields swung over the ball neatly played to him wide from Lee Makel. Next Shields found Tarachulski wide right and when his cross from deep right came over Darren Young tried an overhead effort that came back off the right goalpost. Controversially the flag was up for offside and further heat was piled on the same Assistant Referee when Mark Burchill was immediately called up for offside when a break was on.

With 16 minutes gone the travelling support were getting louder and louder as on the edge of the box Burchill fed Tod and he then Makel but the move ended when Livi blocked that out. The Pars lived dangerously four minutes later as Gabor Vincze set up a move that resulted in the ball sliding invitingly through the Pars six yard box but somehow the yellow and black shirts did not get a shot in.

Dunfermline got more in involved and began to threaten the Livi goal. They were happy to concede only a throw in when Makel and Shields worked play to send in a useful ball from the right for Tarachulski. Makel fired a free kick over from the left that the red shirted Livi keeper tipped away for a corner on the right but when Makel delivered that over all that could be offered was a Campbell lob that McKenzie held.

Ten minutes from half time Greg Ross had to replace Greg Shields who limped off with a recurrence of a knee injury but Greg II slotted in well to the vacancy pushing up and getting stuck in Shields style. Just as well as the game got tougher demonstrated by three yellow cards in two minutes but the Pars fans were really ignited by a wonderful Lee MAKEL rocket from 40 yards in the 44th minute. Lee has been trying this since his success in the first pre season friendly at Raith and this one will be a contender for the Pars Goal of the Season. Receiving the ball from Campbell, the unstoppable right footed shot soared into the right side of the net and the Pars were ahead.

Dunfermline finished the half strongly with Ross squaring a cross that Gary Mason attempted a diving header for the second but it just failed to come off.

From the restart Dunfermline continued the push on the Livi goal but the offside flag seemed to thwart their efforts. When in the 51st minute Campbell and Burchill`s swift passing on the left edge of the Livi area created a chance for Gary Mason he just couldn`t get enough on his shot and the keeper gathered. Two more corners came the Pars way with Campbell`s from the left being cleared as far as Ross. Ross exchanged passes with Makel before sending in a ball that McKenzie turned behind for another corner on the right. This time Makel`s delivery was punched clear by the keeper.

A driving run towards goal by Ross won another corner and there was a chance for Tarachulski as Makel`s ball dropped into the six yard area. Livi got a bit more urgency into their game after Ramon Pereira replaced Lambert and Jason Dair`s penetrating run down the left produced the goal that opened Livi`s account. The ex Par twisted his way around Greg Ross and released a fierce ball into the six yard box that cannoned off skipper for the day, Scott WILSON for the equaliser.

Robert Snodgrass who had replaced Dair after the goal got free on the right and despite the efforts of Aaron Labonte sent over a ball that Pereira managed to head into the sidenetting. Makel had another long range shot that McKenzie held before Livi began to put more pressure on the Pars. Suddenly Pereira was making all the difference and the Lions looked the stronger. Two Snodgrass corners caused problems with only Mason`s telling tackle on Walker keeping the sides level.

Noel Hunt came on for Mark Burchill in the last five minutes but he had no time to change things and nothing changed unfortunately. An 89th minute corner from Makel failed to find Andy Tod`s head and that completed the Pars efforts. Livi had their chances with two 91st minute corners but the game petered out to a 1-1 draw.

Not the most satisfactory of results. Dunfermline tried hard for the first half hour and got the breakthrough before the interval but sadly paid the penalty for not managing to score a second.