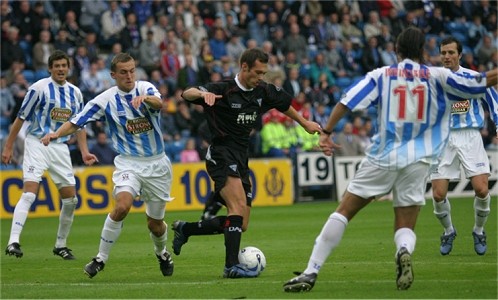 
Derek Young came in for Gary Mason out with the cheek injury sustained in the SPL match against Celtic a week past Sunday and Allan McGregor wears the number one shirt and started his first SPL match since keeping goal for Rangers against Kilmarnock on 26th February 2005. Going into this game Kilmarnock had lost only one match this season on the opening day against Hearts and Dunfermline`s only victory of the 2005-2006 season so far was against Second Division Gretna. Add the Pars dearth of victories at Rugby Park since Boxing Day 1992 then Killie had more to have confidence in than just their famous pies.

Lee Makel and Mark Burchill got the game underway with Dunfermline defending the goal in front of a fairly few sparse away stand. A third minute free kick gave the Pars the best of starts. Darren Young, Iain Campbell and Lee Makel hovered over the set piece 32 yards out, right side, and it was the latter who chipped the ball towards the far post where Scott Wilson failed to control it with his feet but did enough to divert the ball back to Mark BURCHILL who crashed the ball home from 8 yards. Kilmarnock came to life after the shock of going behind. They had go from a 29 yard free kick but he ball sailed harmlessly into the Chadwick Stand. Unfortunately for the Pars their lead was to last only five minutes. Killie advanced through the centre finding Rhiann DODDS on the edge of he box left side and the 25 year old finished well giving Allan McGregor and Andy Tod little chance of stopping the shot.

At this stage it didn`t look as though it was going to be easy to stop Killie as their confidence grew and a roller coaster seemed to be released. A fine move started by Danny Invincible fed Colin Nish and his pass at an angle into the right side of the Pars penalty box looked to be real fodder for Allan Johnston but McGregor was well out to block. Nish headed a Dodds corner from the left narrowly wide of the right goalpost in 17 minutes before Dunfermline had an even better chance to restore their early lead. Burchill found himself one on one with the keeper but the green shirted stopper pulled off a good save to deny the Pars striker`s effort from 18 yards.

Just three minutes later Simon Ford headed a free kick down and through the Dunfermline six yard box but the ball slipped wide right. Then midway through the half McGregor pulled off a fantastic save cutting out a Nish cut back that Boyd was set up to send into the Pars net. The second of two Kilmarnock corners was well dealt with by McGregor fighting his way through a bunch of players to deflect the ball away. The Fifers failed to get the ball out of defence and paid the penalty in 33rd minute. Johnston slipped the ball out to his skipper Gary Hay on the left and he cut back a fine ball from the byeline. Nish went down in the challenge from Young but the ball sat up nicely for Kris BOYD to hit the net from ten yards.

The home side had a chance to go further ahead three minutes from the interval when a quickly taken free kick awarded for high feet against Burchill was prodded through to Invincible. He brushed aside Iain Campbell`s challenge to race in on goal but again it was McGregor to the rescue with a nice confident stop. Two minutes later Nish headed a Johnston cross into the sidenetting as Dunfermline continued to come under the cosh. The Fifers might have gone in level had a fine Ross delivery from the right that Burchill headed well on target from six yards not been beaten around the right post by Alan Combe in the minute of time added at the end of the half.

The Cup tie might still be ten days away but the pace was fast of this match was fiercely competitive. Only Darren Young had earned himself a yellow card but the commitment on both sides was not in any question.

When the second half resumed Derek Young was given a more attacking role replacing Bartosz Tarachulski upfront with Jamie McCunnie coming on to make his Pars debut. From the restart Kilmarnock went all out for the third goal. McGregor failed to take out Hay`s corner from the right and Wilson produced an unorthodox save to block a Colin Nish effort.

The defence got brief respite in 56 minutes when Dunfermline pushed up and the away support got some action in front of them but nothing troubled the keeper. Territorially the Pars managed to peg Kilmarnock back for a spell. Darren Young, Makel and Burchill combined well to set up Derek Young but the offside flag was raised. The home fans were urging their team to "get back into this game" as Leishman`s boys began to connect better.

The 63rd minute saw Dunfermline complete their customary striker replacements, Noel Hunt coming on for goalscorer Mark Burchill who was suffering with a tightening of his hamstring. A 30 yard free kick was despatched high over the bar by Makel while at the other end home expectations were up until Nish overstruck his cross. Midway through the half Dunfermline got the equaliser that they had earned from their continued pressure.

The ball was sent wide right from Makel to Ross. The youngster swung over the ball for Darren Young at the far post and his knock down square into the six yard box was latched on to by Derek YOUNG and the ball went high into the net.

McGregor kept hopes of a famous away win alive saving a piledriver from Dodds in 69 minutes. Next Boyd evaded the offside trap to take the ball left and cross for Nish to head in. But for McGregor that might have put Killie ahead but the keeper was excellent. Killie continued to push but with some last ditch attempts the defence held strong.

Breaking out of defence Darren Young got the luck as his pass was intercepted but came right back to him allowing a defence splitting pass that sent Hunt away on goal. His shot from the edge of the box was sent wide of the left post when he might well have done better.

The replacement of Colin Nish by 18 year old Steven Naismith injected pace into Killie`s game and they should have clinched the winner when with the ball being headed around the Pars area Simon Ford found himself in with a chance to burst the net from 8 yards but he managed to fire over the bar.

It looked like that the Pars had earned a point but 30 seconds from time disaster struck. The ball was swept in from deep on the left for Kris Boyd to knock down for Danny INVINCIBLE on the edge of the box. He volleyed a shot low to McGregor`s right for Rugby Park to erupt. This was yet another fine Pars performance but again it is one that they took anything from.

Keeper Allan McGregor had a great debut, unfortunately Alan Combe at the other end did equally well to prevent Dunfermline leaving with any points.