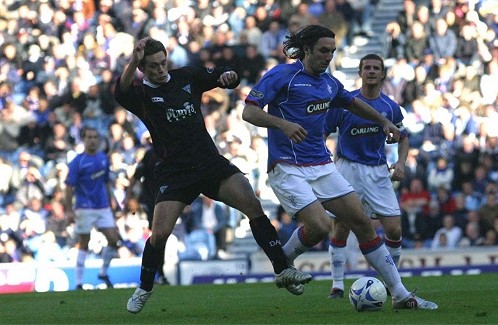 Dunfermlineâ€™s previous half dozen visits to Govan had seen the Pars concede 24 goals, so it was going to take a superlative defensive display if Jim Leishmanâ€™s troops hoped to continue their good recent form. Unfortunately, it was more of the same, despite a brief period in the second half when Dunfermline small but vocal band of fans thought that a different outcome was on the cards.


Dunfermline lined up with Bryn Halliwell in goals after Rangers manager Alex McLeish had refused permission for on-loan â€˜keeper Alan McGregor to play. Andy Tod moved to the bench to make way for the return of skipper Scott Thomson, while striker Mark Burchill returned from injury to a place on the bench. 17-year-old David Muir kept his place and was joined in the first team squad for the first time by 18-year-old goalkeeper Peter Shaw. The Pars debutant must have been somewhat bemused at the sight of the Ibrox pitch being watered in October, then the kick-off being delayed as a couple of hundred red, white and blue balloons (the plastic variety!) descended on Bryn Halliwellâ€™s goal just moments before John Underhill was due to get the game started.

If only the match had produced as much excitement, but in a hushed Ibrox, the home team had only two corners to show for their superior possession in the first ten minutes. Then, Olivier Bernard, who was being given a lot of space on the left side, sent in a low cross that Chris Burke received at the edge of the six-yard box unchallenged. To the relief of the Pars defence he sent his volley wide of Halliwellâ€™s right hand post.Rangers had plenty of possession but the Dunfermline defence were coping comfortably, so it was a surprise that a defensive error allowed Rangers to take the lead in fifteen minutes. Barry Ferguson fed Bernard on the left, and he sent a low ball across the face of goal. had four defenders in the area, so it looked safe enough but with nobody taking decisive action, the ball reached Thomas BUFFEL at the back post, and he struck home Rangersâ€™ opening goal, low to Halliwellâ€™s left.
Dunfermline finally found room to get forward, but Horstedâ€™s run was smothered. In 18 minutes Bernard was again involved, but this time his cut back to Lovenkrands was blasted high over the bar. On the other wing, Chris Burke was beginning to find his way past Zambernardi, and in 24 minutes Halliwell had to look lively to get down to Burkeâ€™s angled cross. Incidents were few and far between and were containing Rangers comfortably without creating anything themselves. Then in the 38th minute, Rangers got their second, once again from a defensive slip. Inside the Pars penalty area, Zambernardi managed to get the ball trapped under his foot and before he had time to recover Burke slipped it to PRSO who turned before smashing the ball into the roof of the net.
Just after the restart Aaron Labonte was yellow carded for a trip on Lovenkrands, but Fergusonâ€™s free kick was comfortably dealt with. It took until one minute before the break to venture into Rangersâ€™ penalty area but Tarachulski couldnâ€™t get on the end of Zambernardiâ€™s ball. Rangers retained their 2-0 lead at the half-time whistle and in truth this was a poor game of very few chances for either side.
After a slow start to the second half, Hunt came on to replace the ineffective Tarachulski after 51 minutes, and the substitution paid almost immediate dividends. Greg Ross and Derek Young played a 1-2 on the right before Ross sent in a perfect near post cross. Noel HUNT rose high but unchallenged to steer a perfect header beyond Waterreus and into the net. Game on and the Bears were getting restless, even more so when their favourite Chris Burke was immediately substituted for Ross McCormack. Noel Hunt caused danger just a minute later and Rangers were happy to concede a corner. But when play switched to the other end Bryn Halliwell had to show his bravery to dive at the feet of Prso and clear the danger. Derek Young became the second Dunfermline player in the book when he fouled Bernard in the 59th minute, but now looked the more composed side.
The frustration of the Gers fans grew and Lovenkrands was given a rollicking when he failed to control a pass inside the Pars area. Alex McLeish could see the game was slipping and in 69 minutes he brought on Argentinian striker Federico Nieto in place of Buffel. If the Pars substitution had been inspired, this one was awesome â€“ just seconds after his arrival a long ball was head flicked into the area by Prso. NIETO was lurking and still running he volleyed an unstoppable shot past Halliwell for Rangers third.
Dunfermlinehad a great chance to get back into the game just two minutes later. In Burkeâ€™s absence, Zambernardi was finding more space down the left. After winning a tackle, he sent in a superb curling cross that Derek Young did well to get to but he couldnâ€™t get high enough and his header went inches over. Sadly, that was the end of â€™s threat and the game was put well beyond the Pars in 74 minutes when some poor defending again allowed Rangers in. McCormackâ€™s cross from the right was heading nowhere but after a couple of swipes it ended up at a grateful Peter LOVENKRANDS feet. He despatched it low into Halliwellâ€™s right hand post and it was game over.
Rangers took skipper Barry Ferguson off but managed to get a fifth after another low ball from Bernard on the left wasnâ€™t cleared and Ross McCORMACK knocked it home from a yard out.
All too often come to places like Ibrox and fail to look as convincing as they do against other opposition, and today was one of those days. Rangers won comfortably in the end although it might have been interesting if the score had remained at 2-1 into the final ten minutes. In his after-match interview, Jim Leishman was at pains to admonish Bryn Halliwell from any blame â€“ unfortunately the same could not be said for his defence.


Dunfermlineâ€™s next match is the increasingly vital clash with Falkirk at in two weekâ€™s time. Defensive lapses of this sort will have to be eliminated if the Pars want to make their way to SPL safety.