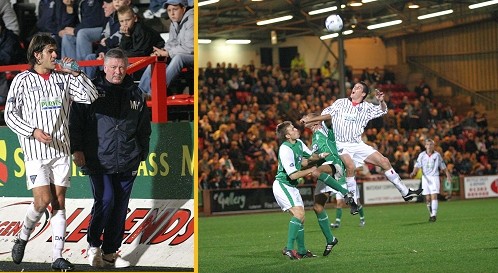 
Three enforced changes for the visit of Hibs. Andy Tod, Bartosz Tarachulski and Noel Hunt came in in place of Scott Wilson, Mark Burchill and Derek Young. For Noel it was his first start of the season and his loyal following were looking forward to him making his mark against the Edinburgh side who arrived at a very wet East End Park having lost only once away from home in this season`s SPL.

Hibs kicked off attacking the goal in front of the McCathie Stand that was struggling to reach one third capacity. The Hibs end seemed to fill up but not until well into the game. The late arrivals missed no goals and all the early action was in front of Allan McGregor`s goal. Hibs forced several corners with Greg Shields interception on Steven Fletcher denying the best chance. Dunfermline were slower out of the blocks with Noel Hunt delivering a couple of crosses that warmed Malkowski up.

A 13th minute free kick out left provided Lee Makel with an opportunity to send a dangerous ball deep into the visitors` penalty box but the Fifers were penalised for jersey tugging before the ball reached Andy Tod at the far post. Three minutes later fine inter play between Ivan Sproule and Guillaume Beuzelin allowed the Irishman to tee up Derek Riordan and Allan McGregor pulled off a fine save as the ball was destined for his bottom left.

Andy Tod headed a free kick wide of the Hibs left goalpost and then Hunt had the ball in the net but the fans` favourite was well offside. McGregor was back in action to hold a O`Connor shot after Fletcher, Riordan and Caldwell had strung some close passes together deep into the Pars half. Liam Horsted had a shot from 25 yards deflected behind for a corner but Makel`s cross was easily defended.

The travelling support were silenced as their team failed to get anywhere near a shooting position. Dunfermline for their part were faring little better as the game was contained in the centre of the park. Lee Makel and derek Riordan tried long range efforts but neither were good enough to bother the scoreline.

Nine minutes from the interval McGregor parried a fine 15 yard shot from Riordan after Caldwell and Sproule sprung the left side defence. The parried save fell to Steven Fletcher on the left side of the penalty box and the hand of Sproule tried to deflect the ball into the net as it was turned back across goal. A yellow card was brandished by Referee Craig Mackay as the `Hand of God` caught his attentions.

Hibs turned up the pressure with McGregor forced into a fine steal off O`Connor as the Hibee threatened on the left side of the penalty box. An injury to Bartosz disrupted the flow and Dunfermline were able to force a corner of their own before another Caldwell-Sproule break took play to the other end. A corner was conceded but like the previous ones nothing came of it and the sides went in all level at half time.

Both managers made half time substitutions. The Pars brought on Simon Donnelly for Bartosz and Hibs Scott Brown for Fletcher. Unfortunately it was Tony Mowbray`s sub who was quick to sink the Pars hopes in the 4th minute of the second half. A careless header from Zambernardi towards Tod on the edge of the centre circle fell kindly for Riordan and he broke, laid the ball through to Brown and he travelled deep into the Pars box to square to the waiting Gary O`CONNOR for a tap in from six yards.

Hunt tried a diving header from Zambernardi`s cross but was just wide of the right post. Next Riordan rocketed a shot off the back of Greg Shields and then the same player made McGregor hold as yet again Hibs came forward. Sproule 64th minute attack produced another Hibs chance but McGregor did well to save from O`Connor.

The home support were getting behind their team as Zambernardi`s ball was laid back by Donnelly for Darren Young to drive at goal but straight into the arms of the Hibs keeper. Two yellow cards for former Hibee Yannick Zambernardi within a minute saw the Pars reduced to ten men. His tackle on Ivan Sproule was his last part in the match and Gary Caldwell sent the 35 yard free kick skiffing past the right post as the defence and keeper looked on in fright. Craig Wilson who had just come on for Noel Hunt found himself drafted to right back as Shields went left to police Sproule. There were appeals for a penalty as Young trying to shake off a hand on his shoulder, was squeezed out in the box but the referee ignored the appeals. Tod and Donnelly were kept upfront as ten man Dunfermline tried to find an equaliser but the counterattack almost finished the contest in 80th minute when Caldwell fed O`Connor and he hit a fierce effort into the stand.

Hibs victory was more or less sealed just three minutes later when Gary O`CONNOR got his and his side`s second of the evening as he spun the defence on the right side of the box and drove in a low shot that slipped in at McGregor`s near post. A Beuzelin - Sproule move nearly added a third but McGregor had a great save from sub Dean Shiels then Beuzelin headed narrowly wide after Hibs were awarded a dubious corner.

The Pars regained some pride when shields whipped in a ball from the left and Gary MASON rose high to head a goal in 88 minutes from 8 yards and then led by skipper Thomson continued to worry the Hibs defence. Alas it was all too late and the Pars suffered their second consecutive home defeat.

Allan McGregor stood out as the Pars Man of the Match, his many first class saves kept the game alive until the very end. Noel Hunt tried hard until he went off with a dead leg but one more match with no points to show for it. Livingston crept a point closer with their 2-2 draw against Rangers and the next SPL pairing is with Motherwell on Saturday who will be seeking some reprisal for their mauling at Celtic Park. Somewhere along the way points are going to have to be collected, the breaks are due Leishman`s team