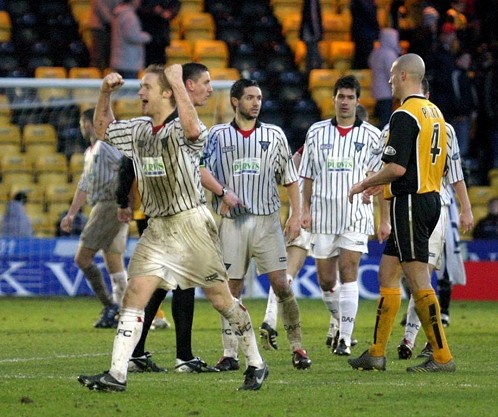 
The Pars travelled to Livingston in search of their first ever SPL win at Almondvale. The Dunfermline and West Fife by election might well have rocked the nation but as far as Leishman`s men were concerned this was the result of the week to chase.

Leish dropped Yannick Zambernardi and Simon Donnelly to the bench and Scott Muirhead was out with the ankle injury that saw him carried off in the first half of Wednesday night`s match against Inverness Caley Thistle. This meant that there was room for the return of Andy Tod and Scott Thomson while Stephen Simmons was given his first Dunfermline start.

Livingston were without suspended Greg Strong as they tried to recover from their seven goal mauling at Easter Road. Dunfermline kicked off attacking the goal at the shopping centre end but the opening play saw the game played mainly in the Dunfermline half. The foot-of-the-table team forced a corner after only 75 seconds but they really created no danger. Simmons tackle on Adams gave Livingston a 7th minute free kick just inside the Pars half and although it was taken short Harold Pinxten was forward to collect a loose ball, evaded the challenge of Darren Young before taking the ball to the byeline and cutting back into the centre of the penalty box but Scott Wilson cleared.

Dunfermline had been no where near the Livingston goal when in their first attacking break of the match, Mark BURCHILL took the ball wide waiting for his team mates to get up. Burchy`s cross from the right looked destined for goalkeeper Ludovic Roy about a yard out off his line but the ball hit Roy on his chest and astonishingly the ball landed in the net.

Just four minutes after going into the lead Noel Hunt had to be substituted with a hamstring problem, Andy Campbell coming on. A Jason Dair free kick was directed at goal and Livi were awarded a corner despite Bryn Halliwell appealing that he did not touch the ball as it cleared his crossbar.

In 20th minute a Darren Young free kick in from the right saw Livi keeper Roy come out and flap at the ball without taking it. Andy Tod was yellow carded when he stopped David McNamee on the edge of the penalty box and Derek Adams blasted the resultant free kick into the stand where the travelling support sheltered from the elements at the back.

In 29 minutes Andy Campbell won a free kick on the right some 35 yards out, Jamie McCunnie came forward and sent the ball into the heart of the home penalty box. Burchill collected the headed clearance on the edge of the box but fired his shot well over the crossbar.

Another free kick three minutes later was lobbed in by Scott Thomson and although Pinxten headed the ball away Scott Wilson won back possession and a cute backheeler sent Gary Mason through but the defence blocked him out. Back at the other end David Mackay headed over a corner kick from the right as the home side were forced to bring on Allan Walker for the injured McNamee. The half closed with Livingston doing some further attacking but the defence held out and the Fifers led at he interval.

Snodgrass and Walker got the second half underway in torrential rain but after 45 seconds it was Dunfermline who were doing the attacking winning their first corner of the match. Young`s delivery posed no problems and neither did a wild high shot from Simmons.

A strong tackle by Simmons on Hoolahan won Dunfermline possession on the edge of their box and play swiftly switched to the other end where Campbell tested Roy from the left side of the Livi penalty box. Thomson kept the pressure up with a surging run that won the Pars a corner from the left. Roy touched Burchill`s header wide for another corner, Young sent the ball through the area and out on the far side from where McCunnie swung over a cross that Tod could only head wide.

Another corner in 58 minutes and then a fine high ball into the box by McCunnie kept the play deep in the Livingston half. Scott Wilson pushed up the left, played in Simmons who in turn played a one two with Burchill but the ex Hearts player shot early and high. Andy Tod took advantage of the break of the ball off Referee Craig Thomson and picked out Andy Campbell but his shot was no trouble for Roy to hold.

A poor pass back from McCunnie just about let Livi sub Steven Hislop in for an equaliser as the match entered the final quarter. Fortunately Bryn Halliwell was quick to react and he cleared although he did need physio treatment when Hislop left a boot in.

The rain turned into a rainstorm despite the far from tropical temperature. Another Pars corner came and went before the Lions had their best chance of the second half. A 77th minute Snodgrass free kick almost brought about a Livi equaliser as Hislop beat Halliwell to the ball but the header from the former Inverness man was fortunately wide to the right of target.

Darren Young`s challenge on Adams gave Snodgrass a further chance from a similar positioned free kick. This time Halliwell fisted the ball but straight at Dorado and the keeper failed to hold the return causing McCunnie to step in and kick the ball off the line. Dunfermline committed their final two subs; Zambernardi for Thomson and then Donnelly for Burchill as Livi put in a final desperate push. Zambernardi`s crucial clearance in 87th minute sent Campbell up the right but Livi were soon back attacking forcing two corners on the left that required Halliwell to save from Mackay. As the match entered the final minute Ludovic Roy had a crazy moment nearly let sub Simon Donnelly in for a killer second.

The final whistle was joyously celebrated by the Pars players while in contrast most of the defeated Livi side hung their heads in deep despair. The result caused Livi Manager Paul Lambert to resign but that`s football. Livi and whoever they appoint will have 12 matches in which to save themselves from relegation.