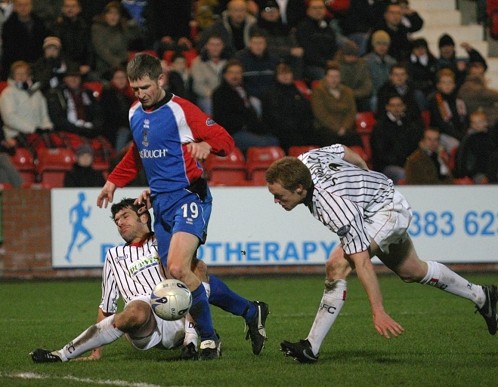 After going into an early two goal lead that they held on to until the 81st minute, Dunfermline were punished by a hotly disputed penalty and then allowed Inverness to steal an equaliser with only two minutes left.

Dunfermline were forced to make one change from the side that drew with Motherwell ten days ago. Allan McGregor failed to recover from the hip knock in that match so Bryn Halliwell returned in goals behind the same ten outfield players. Caley were without injured pair Grant Munro and Ian Black while Charlie Christie preferred Graham Bayne to Dennis Wyness.

The visitors kicked off attacking the goal in front of the empty East Stand. Immediately play was towards Halliwell with Greg Shields having to close out Bayne for a corner within 45 seconds. A second corner a couple of minutes later brought Halliwell into play when he was in good position to gather Dods less than convincing shot.

Dunfermline tried to get forward with Gary Mason forcing play up the right. Simon Donnelly`s delivery in 7th minute gave the Caley a warning that Tokely headed clear but two Pars corners from the right followed, the second of which providing a welcome opener. Scott Muirhead sent a dangerous ball into the six yard box and Noel HUNT raced in to head the Pars into a 1-0 in the 9th minute.

Noel Hunt heads the Pars into the lead

Uncertainty in the Caley Thistle defence allowed Hunt to turn provider for Dunfermline`s second within two minutes of their first. Noel`s header stole the ball away from Darren Dods and set up Mark BURCHILL on the left side of the penalty box to finish in style at the near post.

Two minutes later and Mark Burchill sticks away a second

What was a good start could have been even better when on 20 minutes a well constructed move on the right side of the visitors penalty box from Hunt to Burchill was laid back for Darren Young to thump the ball off the crossbar. Hunt netted the rebound from an angle but the Assistant Referee`s flag was up early for offside.

An Inverness free kick from just 22 yards out cleared the defensive wall but Barry Wilson was just too high to cause damage as the ball bounced behind the Pars goal off the top of the crossbar. Injury to Roy McBain forced the Highlanders to bring on 22 year old midfielder Liam Fox with just 27 minutes gone. Six minutes later Scott Muirhead went down in a Dods tackle on the left and he required to be stretchered off meaning that the Pars too had to use one of their subs. New signing Andy Campbell was introduced in place of the former Dons player. Scott Muirhead is carried off with an ankle injury

Five minutes from the break two Inverness corners on the right down in front of the small band of already silenced travelling supporters, ended with a Tokely header wide. It was far from being all Caley Thistle but yet another Caley Thistle corner in the last minute of the half was nicely placed by Stuart Golabek but Bryn Halliwell was well out to catch.

When the Skids finished the traditional rallying number - "Into the Valley" -it was Burchill and Young who got the second half underway. The kick off routine almost paid immediate dividend but Darren`s ball in from the right was taken by the grey shirted Mark Brown.

The lead nearly became three when a Donnelly 51st minute corner in from the left was flicked on by Hunt to Burchill. His header was netbound until Liam Fox hooked the ball away off the line. There were appeals, probably very valid claims, from the home side but the linesman who was in good position to see if the ball had crossed the line was not to be convinced. In front of the McCathie Stand Halliwell was well out to steal a lofty Barry Wilson free kick off the head of Dods.

A nice delivery in from McCunnie was flicked on by Burchill but Campbell`s return was headed high by Hunt while at the other end a corner from the left was headed wide left. Stephen Simmons came on for Simon Donnelly but Dunfermline were temporarily losing the territorial advantage as Wyness and Hart replaced Bayne and Hastings.

Hunt took a run down the right and centred with a low ball that went straight through the Caley Thistle six yard box. There was little else for the home support to cheer and they had long stopped singing about a day trip to Hampden as Wilson sent a ball wide of the right goalpost before Dods could reach it.

Dunfermline let Caley take the initiative. Wilson was yellow carded for a desperate tackle just inside his own half and when the ball was played forward Wyness drove in on the right side of the penalty box going down when a Pars player apparently tripped the former Hearts striker. Wyness was not even appealing for a penalty as Greg Shields and Yannick Zambernardi closed him out. Referee Brian Winter immediately pointed to the penalty spot and Craig DARGO made no mistake with the award. From 2-1 with nine minutes remaining it took Caley only seven more to grab an equaliser. The visitors who had been more the more eager team throughout the second half continued to go forward and from a corner on the right the ball was not properly cleared and sub Dennis WYNESS, in what looked like an offside position, lobbed the ball in at the far post from the left side of the penalty box.

Although Simmons hit the post with a low shot in the 93rd minute the visitors were worthy of their point and Dunfermline really must stop teams making unlikely comebacks. The match incidents were crammed into the opening and closing ten minutes and at the close the match officials were given a deserved roasting from the outraged Pars support. The decision not to give the Pars that 51st minute decision and then to follow with a hotly disputed penalty decision did nothing to endear the home support to the match officials. Possibly as much of the anger was caused however by the poor Pars performance in a second half when they let their opponents play themselves back into the match.