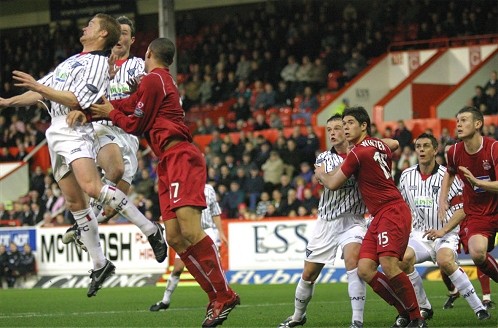 
Aberdeen lost 3-1 to Celtic the previous Sunday. Dunfermline defeated Celtic 1-0 two weeks before so could logic produce a Dunfermline win at Pittodrie? One enforced change for the trip to Aberdeen; stand in skipper Scott Wilson was out with a thigh injury but that made room for Lee Makel to return. Aberdeen made two changes from the team that lost last time out against Celtic. Four ex Pars start for Jimmy Calderwood`s team. Former Dunfermline reserve keeper Jamie Langfield displaced Ryan Esson giving him his first SPL start since 24th April 2004, and Russell Anderson returned to the team meaning Scott Muirhead started on the bench. Gary Dempsey was also on the bench.

The bright sun that had made the warm up look like an afternoon in early season had sunk behind the Merkland Stand as Crawford and Smith kicked off with Aberdeen defending the goal in front of the Richard Donald Stand.

After 90 seconds a long clearance from Langfield that was flicked on by Jamie Smith pressurised Greg Shield into conceding the first corner of the game but the visitors defence dealt well with the set piece. There was a disturbing amount of possession for the Dons in the opening seven minutes. Then perseverance from Noel Hunt on the right ended with a fine ball into the Aberdeen box. Derek Young`s backheeler set up Lee Makel but he blasted into the crowd from 15 yards out. Hunt continued to bother Aberdeen winning a free kick on the left that Makel sent over. Barry Nicholson headed clear but the Pars kept up the pressure until Langfield eventually got hold of the ball from a Young cross.

In 14 minutes the Pars were denied a corner from Jamie McCunnie`s cross allowing Aberdeen get back up the park but Kevin McNaughton was wild with his shot. Crawford and Nicholson combined to send an inviting ball through the box before from the return Winter shot from 20 yards but well wide of the left post.

Dunfermline countered maintaining the end to end play. Makel`s shot from a Young lay off floored Russell Anderson and Greg Ross took advantage threading through a good ball for Gary Mason to run on to and test Langfield with a well struck shot. The turquoise shirted keeper beat away the shot which was the best chance of the game so far.

A brave header by Labonte on the edge of the penalty area stole the ball off the foot of Stevie Crawford as the game entered the second quarter. After some trackside treatment Aaron was back to head away a Byrne cross but Aberdeen continued to enjoy some controlled play deep in the Pars half.

With Dunfermline trying to get forward Andy Tod was caught out with an aerial pass that Crawford pounced on to. He was through with just Greg Shields and Allan McGregor to beat. Stevie twisted and turned Shields 16 yards out. The former Pars striker did get in a shot as Shieldsie tried to recover but McGregor was well placed to thwart Craw with a good save.

With ten minutes to half time Noel Hunt managed to get a header in on goal but the effort went straight into the hands of Langfield. Dunfermline were going forward when possible and although Smith and Crawford threatened at times to burst through the visitors defence, Aberdeen never really troubled McGregor.

Seven minutes later the Pars carved out another good chance. Young`s ball across the Dons 18 yard line was turned back from Ross to Campbell. Langfield fisted the youngsters outswinger out to McCunnie but again his shot was wayward. Back at the other end a good and quick build up let Nicholson in for a shot, albeit from 25 yards but the white gloved hands of McGregor captured the ball.

Just before the interval there was a late fright for Dunfermline. Crawford`s ball in from the left was well headed out for a corner by skipper Tod as the Aberdeen players rose to anticipate an easy conversion at the far post. The corner from the right was not fully cleared and Byrne turned the ball square but fortunately Zander Diamond`s header managed to follow Toddy`s earlier one. The Fifers injury list grew longer as a hamstring injury to Andy Tod forced him to finish his game at the midway break. Mark Burchill replaced Toddy meaning a re-arrangement of the team. Shields was flanked by Ross and Campbell in defence and Derek Young dropped back to right wing back to make room for Burchill upfront beside Hunt.

Aberdeen made two changes as the two Jimmies tried to change their sides fortunes. The home crowd tried hard to rouse their favourite. Having won a corner on the right Chris Clark found himself with a shooting chance after 55 minutes but his sweetly struck shot was blocked on the six yard box by Crawford.

Substitute Richard Foster made a driving run down the right and across the top of the Pars box and the home support were off their feet to celebrate the opener but the ball skidded narrowly wide right. The Fifers were pegged back as the red shirts swarmed around the Pars box.

Darren Young came on for Lee Makel just before Allan McGregor tipped away a Jamie Smith free kick and the Pars survived the Dons corner from the right. Darren blocked a Nicholson cross to concede another corner. The quickly taken effort did not work but Aberdeen soon had the ball back into the Pars box with Labonte putting in a timely header to clear to safety.

Russell Anderson was shown a yellow card for an elbow on Mark Burchill in 70 minutes and the Pars were awarded a free kick in a central position just 20 yards out. A touch to Darren Young teed up a shot that was deflected just wide of the right goalpost. This took the pressure off the Pars defence for a moment but it was soon back to desperate defending in front of McGregor. Clark`s high ball in from the left was cleared only as far as Smith and then Shields put in a good diving header to keep the scores level. The defence continued to hold out and the game began to look familiarly like that at Celtic Park two weeks before as Aberdeen threw everything at the Pars makeshift defence. In the 78th minute Crawford turned Ross on the left side of the box but his shot was curled over the crossbar on to the roof of the net. Next Smith fired in a difficult ball that flashed through the Dunfermline box and out without anyone touching it.

Burchill won a 83rd minute corner out left but Darren Young`s cross was blown up for excessive pushing in the six yard box. Back in front of McGregor Byrne took far too much time further frustrating the home support and their manager who raised his hands upwards in dismay.

In the last minute Noel Hunt was unbelievably unlucky as he swooped on a weak back pass from McNaughton but Langfield who had not got fully back into his own box after firing a free kick from just inside his own half into the Pars box, managed to clear. Remarkably seconds later Burchill was handed a similar chance to beat Langfield but left one on one again the keeper came out on top.

Aberdeen`s 8th corner of the game, 90 seconds into stoppage time, was punched away by McGregor and then Clark`s follow up was driven down. After three minutes of added time, McGregor`s fisted clearance from the final corner of the game was the last action of the day and the game of shooting in was concluded by Iain Brines whistle.

It was a great defensive display from the Fifers that earned a good point. They came close with Darren Young but that apart never looked like scoring in the second half, whereas the Dons looked capable of doing everything but put the ball in the net. Given the injuries and the desperate shortage of experienced central defenders available the result was a great achievement for Greg Shields and his defence.

Livingston`s 1-0 win at home over Dundee United tok them off the foot of the table but next week it`s Dunfermline`s turn to try and take points off United.