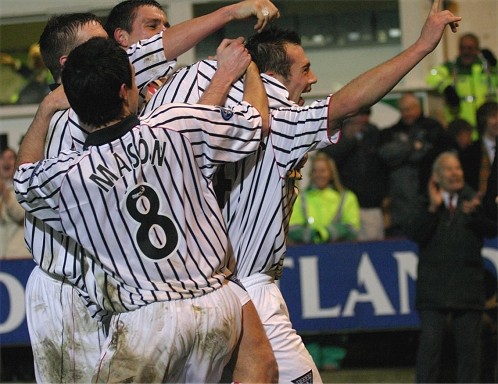 The Pars took on Rangers for their first Christmas meeting since 1965. Santa was good to the Fifers that day as they recorded what was a famous league victory at Ibrox. Forty years on the fans turned out in their Christmas jumpers and newly acquired scarves to see if the reindeer jockey would return the favour against long odds. Dunfermline started at 13/2 against.

Leishman`s line up showed three personnel changes from the side that allowed Gordon Chisholm`s side a 2-1 victory on Tuesday night. Aaron Labonte and Iain Campbell were back on the bench as Noel Hunt and Darren Young are drafted in. On loan keeper Allan McGregor was unavailable since he is contracted to Rangers so Bryn Halliwell was back between the sticks and 16 year old international keeper Greg Paterson was on bench. [ If Greg, formerly with Rangers at youth level, was required he would become the youngest ever to play in the SPL. That record is currently held by Greg Cameron who turned out for Dundee United v Kilmarnock at the age of 16 years, 8 months and one day.]

Lee Makel and Darren Young kicked off off for Dunfermline defending the goal in front of the Norrie McCathie stand and things looked good with birthday boy Noel Hunt immediately bursting into the right side of the Rangers penalty box. Unfortunately when Darren Young swung the cross in it was too strong for Mark Burchill to get on to.

The visitors` top goalscorer was set up for Rangers first chance of the game after three minutes but blasted his shot over the crossbar from ten yards out. The Pars came back at Rangers but a misunderstanding on the edge of the Rangers box meant that Hunt`s lay off failed to reach Scott Thomson and the Pars skipper had to beat a hasty retreat to stop the break from Chris Burke.

In the seventh minute Hunt had a chance when Kyrgiokos slipped up but sadly the opportunity seem to come as a surprise to him and his half powered shot was easily held by Ronald Watereus. Four minutes later Barry Ferguson sent Thomas Buffel through on the right. With Andy Tod trailing him he motored into the Pars box and despite big Andy`s attentions put over a short cut back for Peter Lovenkrands in the six yard box. The opener looked extremely likely Scott Wilson put in a first class tackle to keep the the match goalless.

A touch back from Burchill into the path of Hunt might have set up another shooting chance in the 14th minute but control eluded the Waterford lad and Watereus was spared a job. Two minutes later however Noel was the provider was he pounced on to Tod`s headed on free kick and took the ball to the left byeline before chipping the ball invitingly across the six yard box where Andy TOD arrived and unchallenged he headed Dunfermline into a 1-0 lead. This was no more than was deserved for the good opening quarter of an hour but a soft free kick when Stephen Thompson made the best of challenge from Scott Wilson, had a nasty sting.. The 22nd minute free kick was hotly disputed and when Peter LOVENKRANDS stepped up he drove around the wall and home from 22 yards into the far left of the Pars net. Cruel for the home side but the despondent home support were on their feet celebrating within the same minute.

From the kick off Dunfermline took route one and catching the Rangers defence cold, Mark BURCHILL latched on to a Young pass to drive into the box and place a shot coolly beyond the Rangers keeper from 15 yards to immediately restore the Fifers lead. Well what a match and only midway in the first half!

Thomas Buffel came close as he dived in to head a Chris Burke cross on target but Bryn Halliwell was there to make the save. Three quick corners to the Glasgow side were well defended but territorially the game was in Rangers favour. Greg Shields did really well to stop Andrews progress into the pars goalmouth but was then yellow carded for over protesting. Another corner this time from the left was nicely taken out by Halliwell and the Rangers push was contained.

The Pars first corner of the game in 38 minutes, way up in the north west corner, was nervously defended but the white shirts were never near converting anything from it. As half time approached you might have expected the SPL champions to push to bring the scores level for the break but the last five minutes were much more comfortable for the team in the lead even despite a free kick that ended up with Halliwell taking a hefty challenge from big Marvyn Andrews.

The second half started with two corners for the Pars in the first two minutes and from the second Darren Young drove a 22 yard shot that Watereus turned around his right hand post for yet another corner. The keeper took that one and his opposite number was in spectacular form to thwart Stephen Thompson from inside the six yard box. Burke`s 49th minute cross was firmly headed but the Pars keeper showed fantastic form to retain the lead. As Rangers came forward Barry Ferguson worked in a shot that Halliwell saved dropping to his knees. When Gary Mason pulled down Thompson for free kick 25 yards out the quickly taken set piece was to no effect. Scott Thomson won the ball off Burke and sent Hunt scurrying up the left but even though he failed to square the ball for Burchill it did keep the pressure off the Pars defence for a few minutes.

On the hour Rangers first corner of the second half brought a good diving punch out of Halliwell. Ferguson gathered and Burke put in the shot that landed half way up the East Stand. Play switched to the other end and Burchill`s delivery in from the right touchline was met by the head of Greg Ross but unfortunately the effort went straight into the arms of the black shirted stopper.

The 64th minute Lovenkrands corner from the right was headed goalwards by Marvyn Andrews at the far post and the blocked out ball fell to Thompson and his half-hit shot trundled wide right. The Assistant Referee`s flag was raised and when Referee Craig Thompson consulted him he awarded Rangers a penalty. Lee Makel was judged to used a hand to keep out Andrews header, he was red carded and LOVENKRANDS despatched a left footed shot into the net to the right of Bryn Halliwell.

Three minutes later, in 68 minutes, the ten men were pinned back and from a short taken corner BURKE evaded the tackles of Mason and Shields as he cut into the right side of the Pars penalty box to finish with a wicked shot from eight yards that soared into the roof of the net from an acute angle. Once into the lead Rangers looked a far more confident side and Dunfermline were suppressed by the all blue outfits.

At a corner Buffel from the far post sent a 82nd minute shot wildly over the crossbar but really against ten men they were never under any threat. A double substitution brought on a fresh strikeforce with Tarachulski and Derek Young replacing Hunt and Burchill but they never really saw any service to make their mark from.

Nacho Novo`s ball across the face of the Pars goal should have been turned in by Thompson but he missed it spectacularly. There were three minutes added to the regulation 90 as two corners for the Pars in dying minutes were followed by one final dramatic corner from the right. As Iain Campbell`s cross dropped into the centre of the box, Referee Craig Thomson blew his whistle and pointed to the penalty spot. He then brandished a second yellow card to Kyrgiakos to even the numbers up.

There was uncertainty in the Pars ranks as they tried to establish who was going to take the penalty. With likely candidates Makel and Thomson already off the park, Darren Young assumed responsibility he marched up and sent the ball into the right side of the net as Watereus went the wrong way. The kick off to continue was the final kick of the game and Leishman`s team had won a remarkable point. Twice ahead, Dunfermline deserved something from this game and the 96th minute equaliser was justice. They got some disappointing decisions against them. Lee Makel might have handled the ball on the line but was it deliberate? The free kick that gave Lovenkrands Rangers first was also hotly contested. Makel`s red card puts him out of the Hogmanay match at Falkirk but if the same workrate is reproduced at Falkirk then surely three more points can be won in 2005.