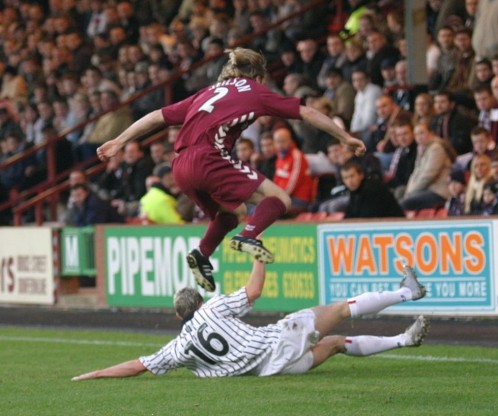 No Scott Thomson for this game but Scott Wilson returned to the central
defence. Mark Burchill was fit to line up beside Noel Hunt, Iain Campbell took
the place of Aaron Labonte and with Darren Young out suspended Greg Ross
started. Hearts made one change, Pospisil coming in for Jankauskas.

Hearts kicked off towards the McCathie Stand and within the first minute Paul
Hartley slipped an early free kick from 30 yards wide of the left post. The Pars
were quick to respond when in the next minute Jamie McCunnie sent the ball on to
the right wing for Greg Ross to despatch a handy ball into the six yard box.
Andy Tod arrived to meet it but his header went over the crossbar.

There was a let off when Hartley burst through into the right side of the
home box but he raised cheers from the home support as he blasted his shot high
into the stand. The Pars looked comfortable soaking up the visitors attacks
before winning a 19th minute corner of their own but Lee Makel`s cross was too
strong for the target men. Play was soon back at the other end and a free kick
conceded by Campbell for his challenge on Rudi Skacel allowed the Hearts top
scorer to send over a ball that Allan McGregor struggled to reach. That was
because he was impeded and Referee Craig Mackay awarded in the keeper`s favour.. A Hearts corner at the midway stage of the first saw Pressley shoot wide and
he was back in his own goalmouth in the next minute to clear away a Mark
Burchill chip from the edge of the penalty box. This came about through a
defensive misunderstanding when Craig Gordon had to leave his box but the Pars
luck was out and they failed to take this gifted chance.

A 26th minute break let in Rudi Skacel but McGregor made a tremendous save
when the Hearts man launched his 8 yard shot on target. Gary Mason did well to
block the follow up but the warnings were there and two minutes later the Jambos
found the net. Calum Elliot received the ball on the left side of the box. His
shot was not good but Steven PRESSLEY was in perfect position to turn the ball
in at the right post. Saulius Mikoliunas had his low drive deflected narrowly wide right and the
Pars survived the 33rd minute corner. The home side did try to retrieve things
before the break. A weak Hunt shot from 25 yards went straight to Craig Gordon
and a Lee Makel free kick was headed out of the Hearts box.

Their lead might have doubled in 40 minutes when Hartley`s pass was turned
towards goal by Michal Pospisil but McGregor kept it out. As the chances kept
coming next it was the Hearts central defenders who threatened to provide the
second. Steven Pressley`s cross from the right wing was headed into the
sidenetting by Andy Webster.

Bartosz Tarachulski was a half time substitute for the Pars replacing Lee
Makel. His first involvement yielded Hearts a free kick in a central position 35
yards out. A corner resulted from the mayhem at the setpiece and when that came
over from the right McGregor couldn`t hold the ball and there was some frantic
defending to prevent Hearts doing further damage. Noel Hunt`s tackle on Pressley
just outside the box had the Edinburgh folk appealing for a penalty but there
were no grounds for that. Bartosz Tarachulski tries to find a route through the Hearts defence

Hunt`s blocked cross in the 53rd minute won the Pars a corner from the right
and when the return came over Burchill flicked the ball on for Tarachulski but
the newly introduced striker couldn`t get a shot in. Next minute Hearts worked a
fine goal to double their lead. Mikoliunas combined with Robbie Neilson to put
the wing back through into the penalty box. His close cut back picked out
POSPISIL who finished clinically to beat Allan McGregor at the near post.

Things were not looking too good for Leishman`s men but they remarkably got a
goal back in 58 minutes. Pressley was yellow carded for the stop on Tarachulski
and from the free kick Greg Ross gathered the ball in the centre of the Hearts
box. The youngster`s efforts to smack the ball goalwards were not convincing but
when the break dropped for Mark BURCHILL on the edge of the six yard box, the
striker dug the ball out from under him to put the Fifers right back into the
match.

Hearts were not for giving up and they forced corner after corner. When Scott
Wilson conceded a free kick midway inside his own half taking down Elliot, the
free kick let Hartley float the ball into the penalty box and POSPISIL stole in
to head simply into the centre of the Pars net. From being one behind and
looking likely to fight back, the third goal for the Maroons in 67 minutes
possibly finished that off.

Iain Campbell`s 71st minute free kick created a chance but the Dunfermline
deflection in front of goal was straight to the all sky blue kitted Gordon. Five
minutes later Hunt beat his man on the right, took the ball to the byeline and
delivered the ball on to the head of Ross. Unfortunately he was off target and
the opportunity for a second Pars goal was gone. Next Tarachulski was on the end
of a corner but not sufficiently to bother the scoreline.

Hearts introduced both their most recent signings Lithuanian Nerius Barasa
and Icelander Hjalmar Thorarinsson but it was the Frenchman Julien Brellier who
set up an 81st minute fourth goal for Rix`s outfit. His run seemed to suggest
that he was going to make room for a shot but instead he threaded a deadly pass
into the right side of the box for Rudi SKACEL to finish. McGregor had no chance
of preventing the Hearts player`s 15th goal of the season. Toddy attempts a knock down to Bartosz

Hunt pulled down Fyssas on the left edge of the Pars penalty box and from the
free kick Brellier, unmarked in central area, fired in a shot that fortunately
was blocked. Hearts were showboating typified by Skacel`s 88th minute
speculative effort that caught McGregor off his line but the right goalpost kept
the ball out.

The final whistle came as a relief and Dunfermline knew that they had been
beaten by a Hearts team that had certainly been worthy of their second spot in
the SPL. They were on song from the start and danger loomed from every one of
the ten outfield players. Dunfermline tried hard but it was not nearly good
enough to do anything to stop the Tynecastle machine.

The most welcome news of the afternoon was Livingston`s 3-0 defeat at
Inverness so the Pars remain 11th and the goal difference is still the same for
both Dunfermline and Livi. There might not be any better chances of points next
week as we take the trip to Easter Road.